A Day at Home

I was off from work today and thoroughly enjoyed the day. I went out to get the Newspaper and saw that the moon was still up and looking interesting so I came back in the house and grabbed the camera to catch a picture of it before it set. 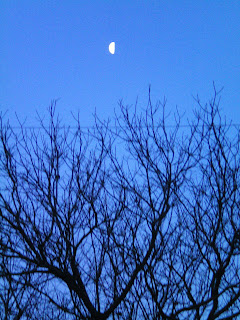 It just looked so neat sitting in the sky just above our chestnut tree. Which reminds me... tomorrow I have GOT to get out there and clean up all those chestnut hulls as Bernadette has been getting them in her hair and I have to cut them out. Boy is she looking raggedy - I need to get her an appointment with the Groomer. No more long haired animals for me!

After I got the laundry out to the laundry room and started; I decided to work on Diane's Crazy Round Robin block and free hand designed the beaded border as well as the blue flowers in the center of the blue velvet portion of her block. I  really like how it turned out and I hope she will like it as well. 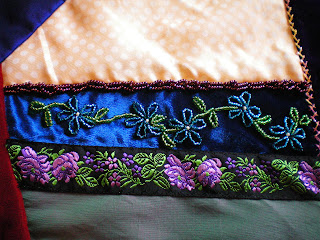 Then I decided to finally get the last two FQ (Fat Quarter) blocks completed that are WAY past due. First I made one for Irene in England... YES FINALLY! 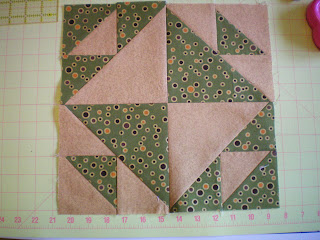 Then I made one for Diane... 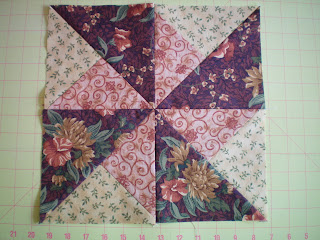 Once I had them completed I decided to see what was also needing to be completed in our swap database and found I need to make 2 log cabin blocks with red centers and 2 with yellow centers. One of the red's being for Diane so I started on them first and will do the yellow centers once these two red centers are completed. Just a few more rounds and they will also be ready for mailing. 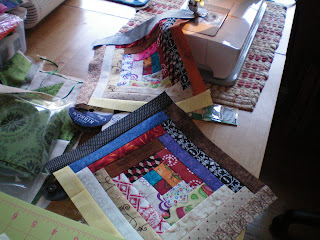 Then tonight we drove out to the Kia Dealership as Scott had received one of those... "Bring the key - YOU MAY HAVE WON A CAR" postcards. To Scott that just means a way to hassle the Sales Staff and test drive a car we can't afford. He really liked the Kia Soul he drove - I told him we will have to save up and get him one in "Alien" green. On the way home we passed this gas station and Scott was saying... "Take a picture... take a picture". We have to wonder if our President knows his name and likeness are being used to sell gas... 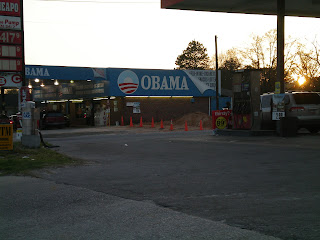