A Gentle Walk in The Wods 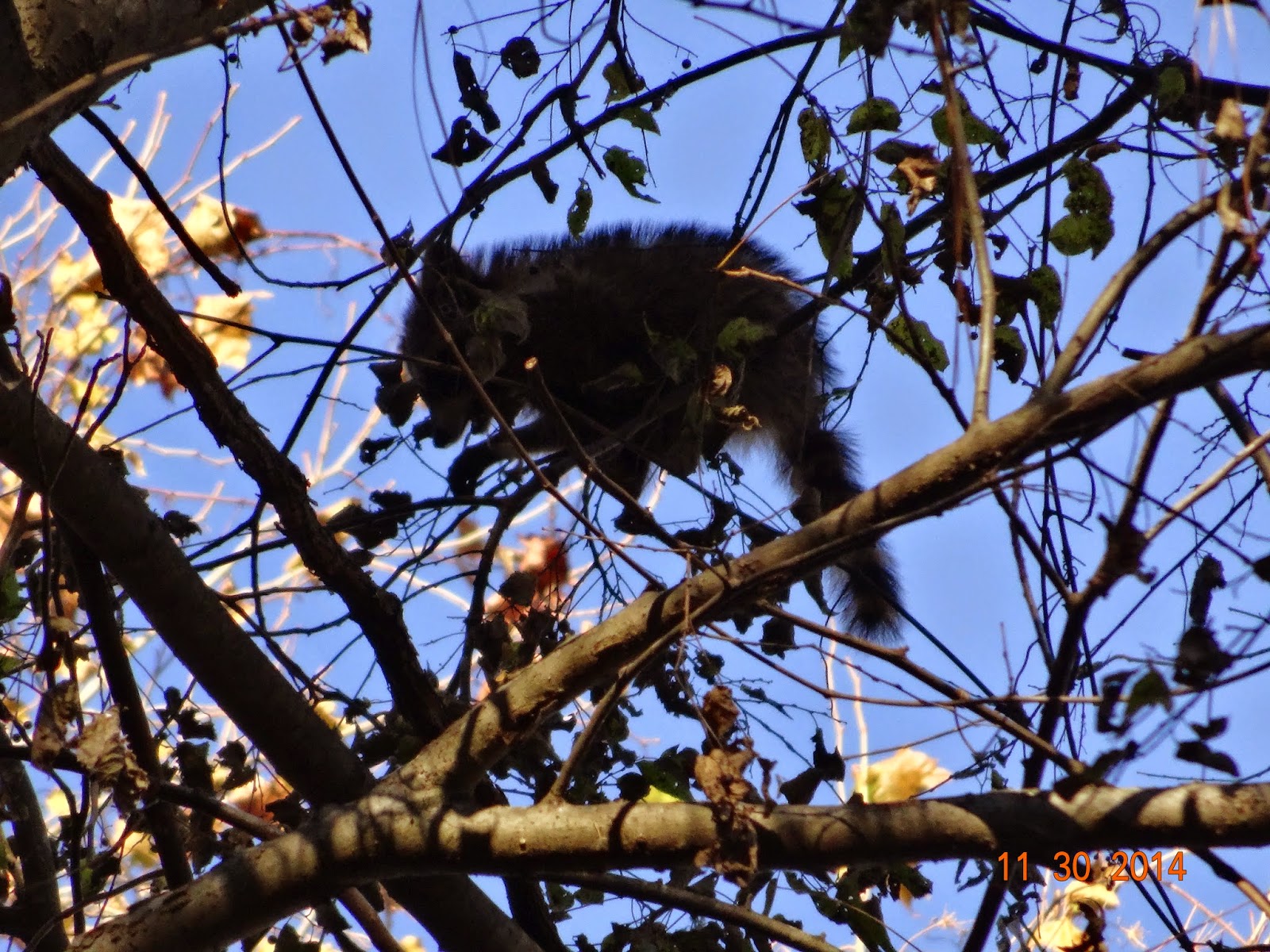 I AM SO TIRED!

I worked overnight last night and should really be asleep at this point but Greg wanted his hair cut... then I wanted a bath but the hot water was used up before me... so I had a cool bath which has made me NOT sleepy. SO... I've cut Greg's hair and have started a pot of beans for some Bean Soup for later. Perhaps I will get some rest eventually.

We had a nice Thanksgiving with some of Scott's family.... lots of yummy food! We w ill catch up with some of my family next weekend. 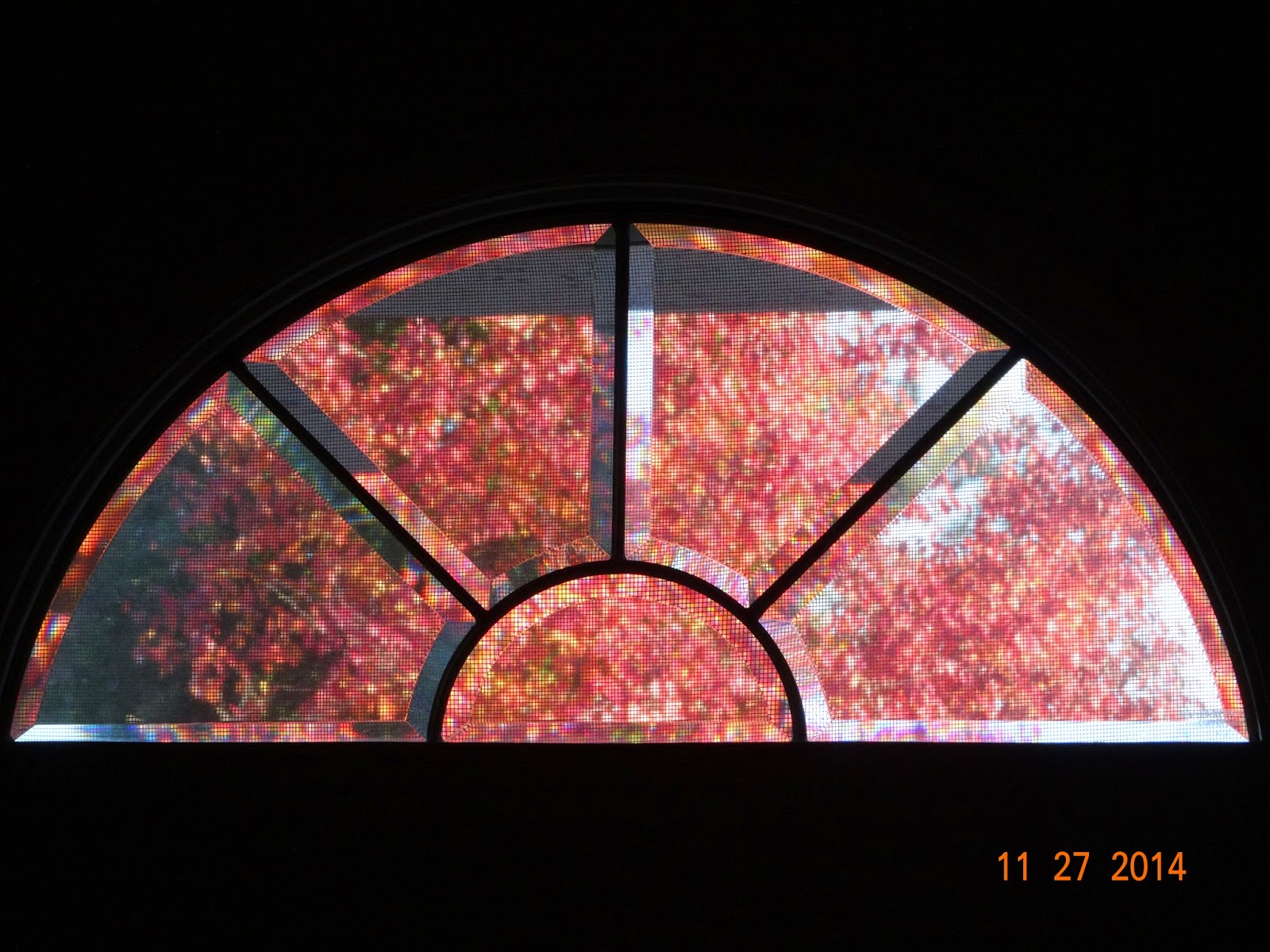 I took this really neat picture through the window of our front door of our Hawthorne cherry tree. The Fall leaves have been absolutely beautiful this year. 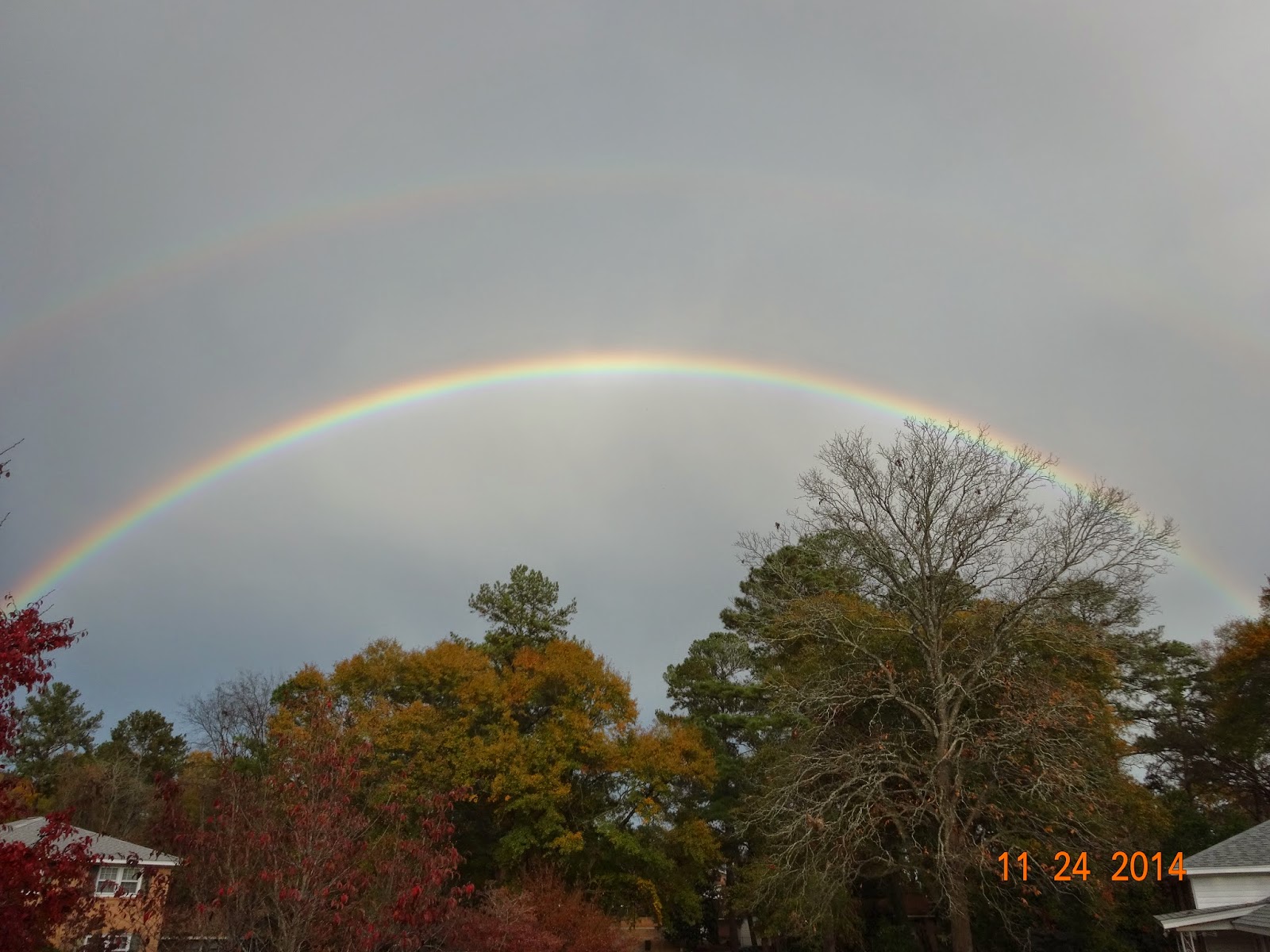 And one afternoon this past week Scott came in from work and said to go out front as there was a double rainbow. And there sure was and it was beautiful!

Thanks for stopping by!

1 -3 T  Sage, according to your taste preference

Combine all ingredients in a large bowl.  Add chicken broth to desired consistency.  If baking in a pan add a bit more broth.  For stuffing the bird use less broth.Bake at 400 F for ~30 minutes or until set
- November 27, 2014 2 comments:

Twelve Things I am Thankful for....

I'm here! YES! Posting again... We had a bit of a HAT crisis here this past week. Scott has somehow misplaced his beloved hat that I made him several years ago; seen below in this photo of the two of us. 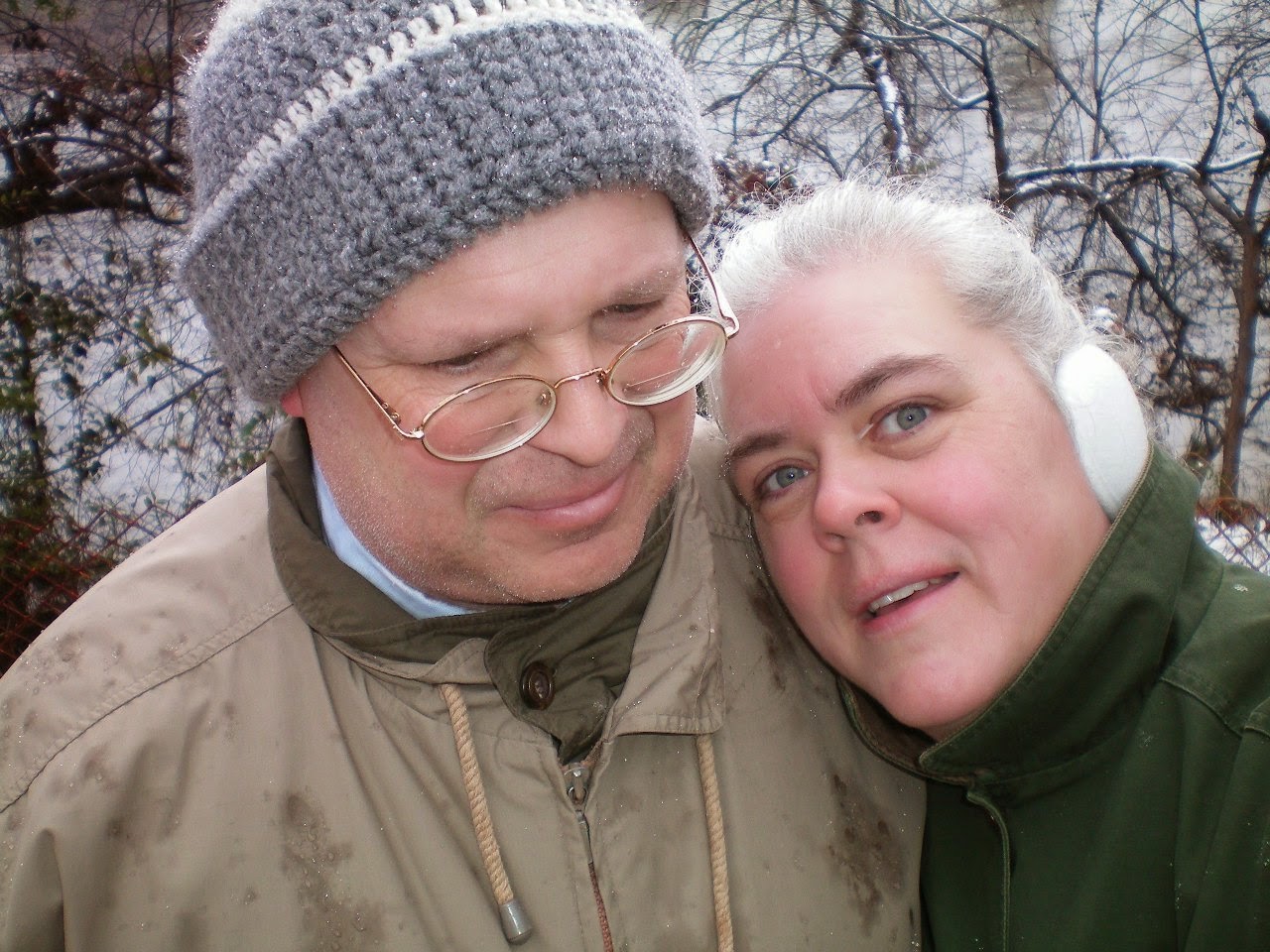 SO being the GREAT wife I am ( ha ha) I whipped up another and this one is made of super warm Merino Wool. I LOVE working with Natural fibers! 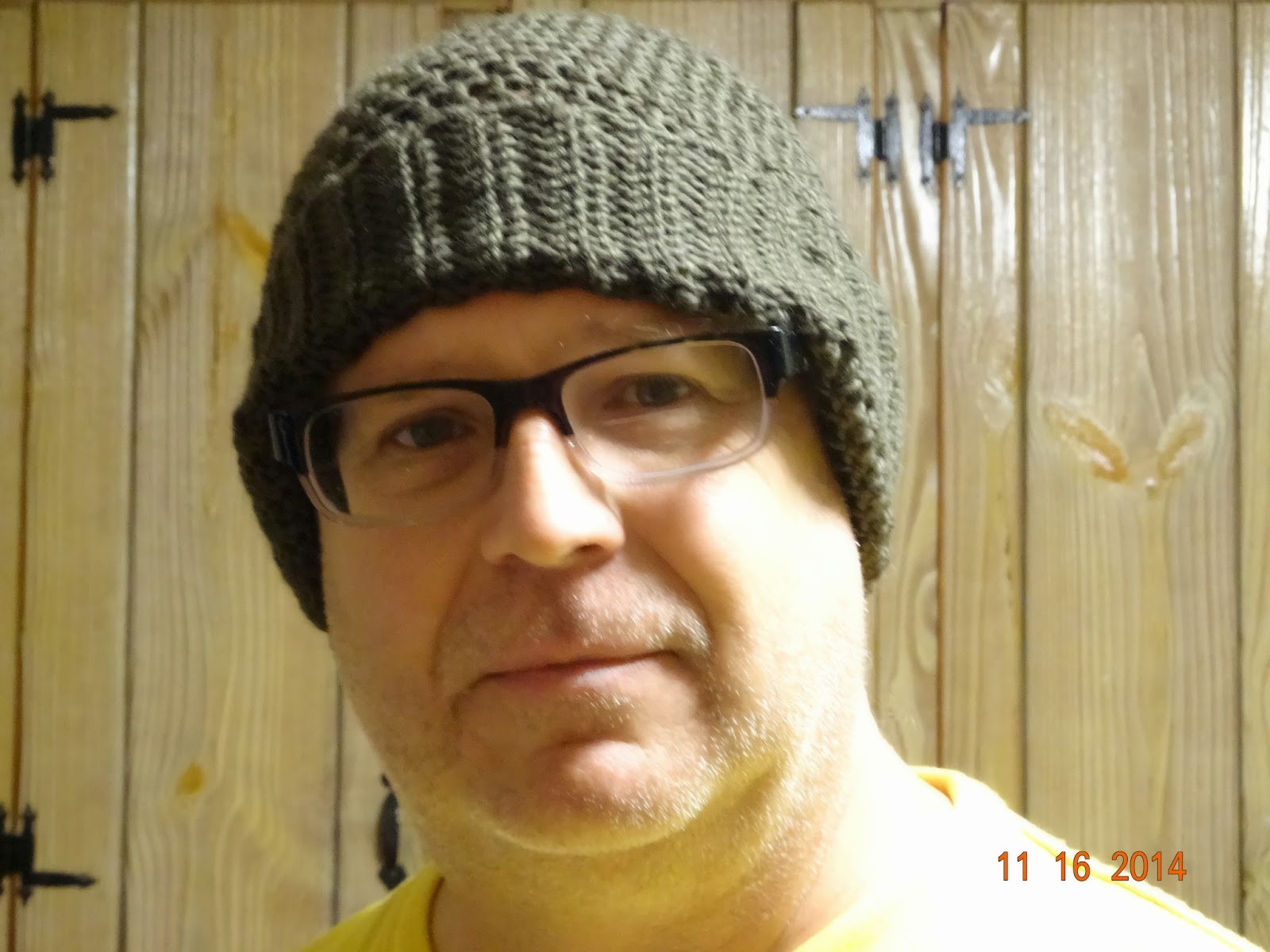 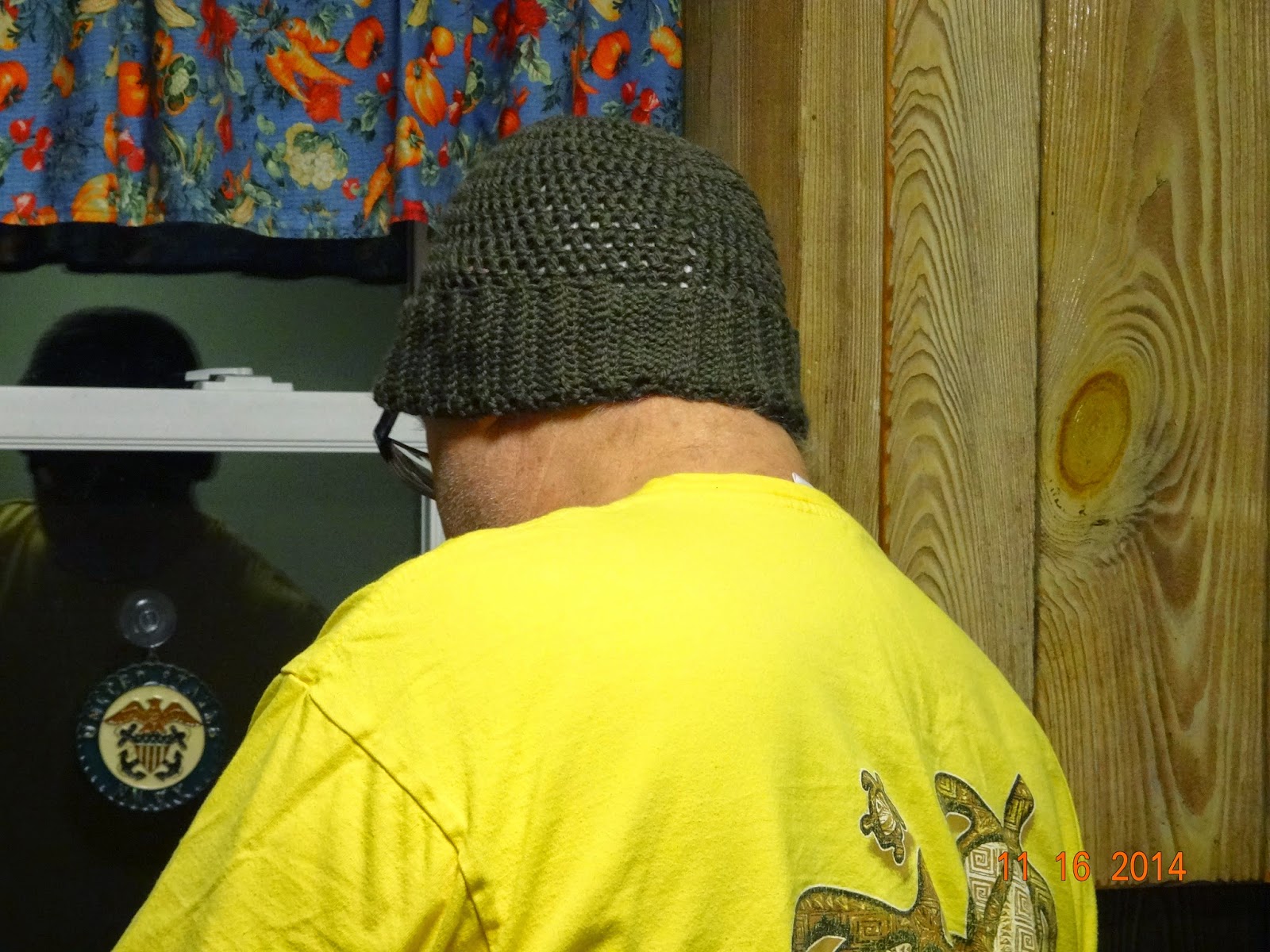 He is thrilled with the new hat but we are both hoping his gray hat turns up too.

When I shared the photos of the new hat with my co-workers my Boss said she wanted "one of my hats" so she bought the yarn and I made her one as well. I made her a slouch hat. I really like how it turned out and am going to make myself one soon. 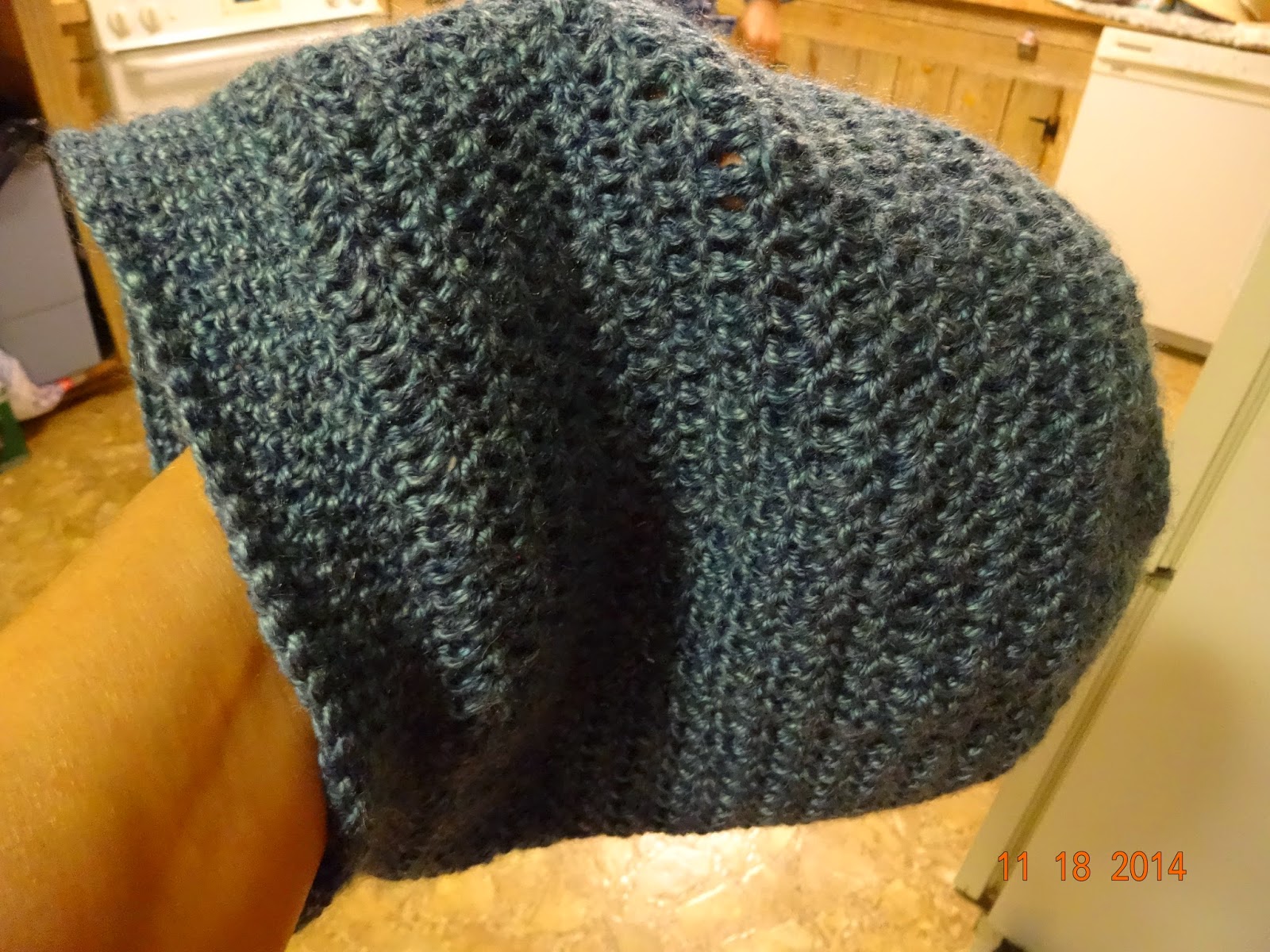 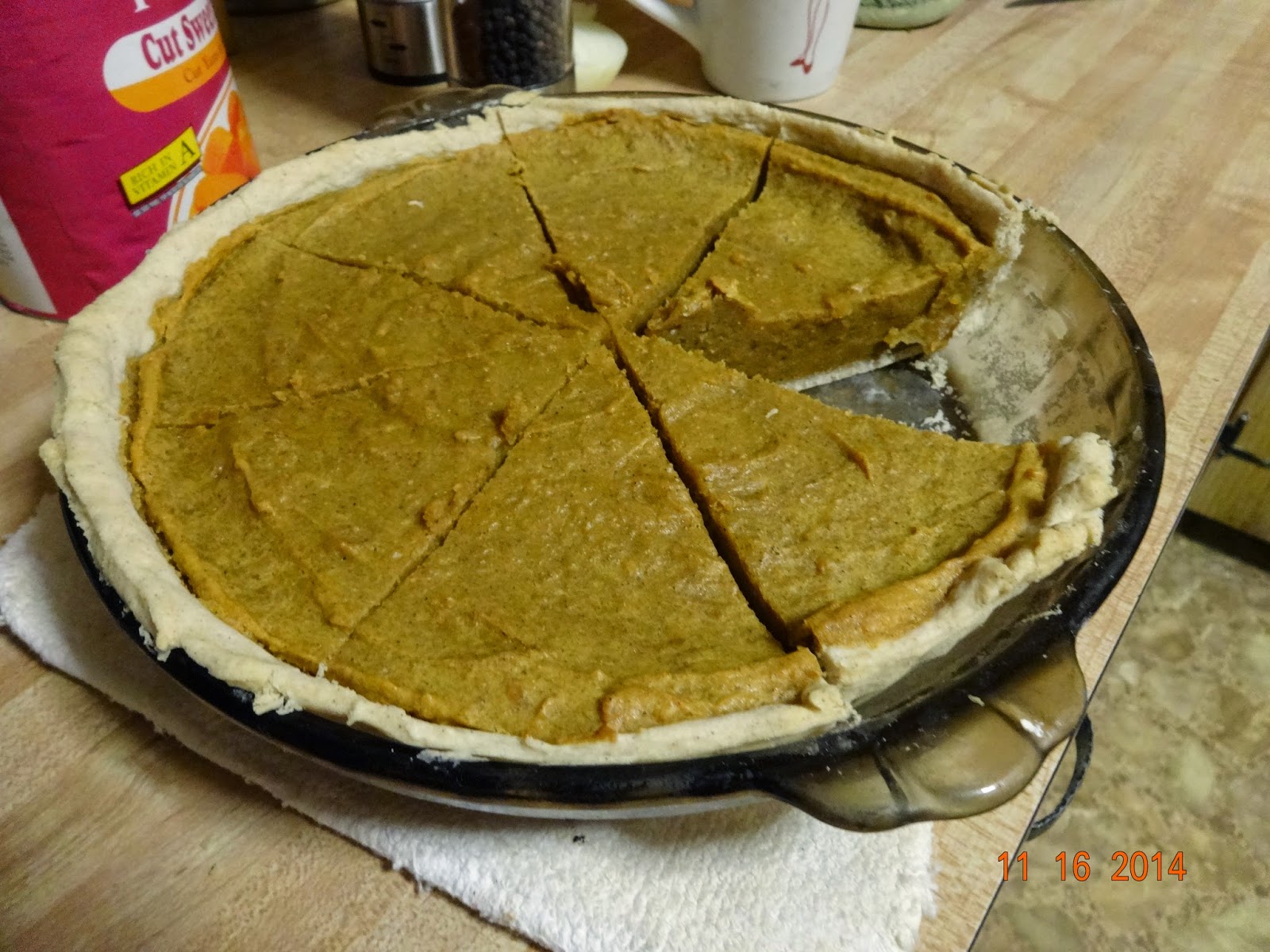 Greg tried his hand at making a sweet potato pie last weekend. His filling turned out pretty good but I need to work with him on the crust as he over worked it a bit and it was sorta tough.
He does pretty good in the kitchen for a 28 year old... now if he could just find a young woman that would appreciate it. Someday!

Scott got his car and our old truck back up to running once more. His car needed a new hose and the truck's alternator had failed but luckily it was under a life time warranty. He says his car needs a sensor that we will need to get soon but it is running now so we will get the part as soon as we can. The dishwasher is still awaiting repair but hopefully we will be able to order the parts for that soon as well. Everything seems to be falling a part around here.

It's stayed in the mid 40's today.... CHILLY! Made me wish I had a REAL winter coat; the coats they sell down here are just not warm enough for cutting winds and chill factors. Of course Greg has decided that he'd like to cook our dinner tonight on the grill! Yep outdoor grill at 46*... glad it's him and not me. He is making a dish called "Chicken under a brick" and some corn on the cob. I am just making some carrot coins to go with it. 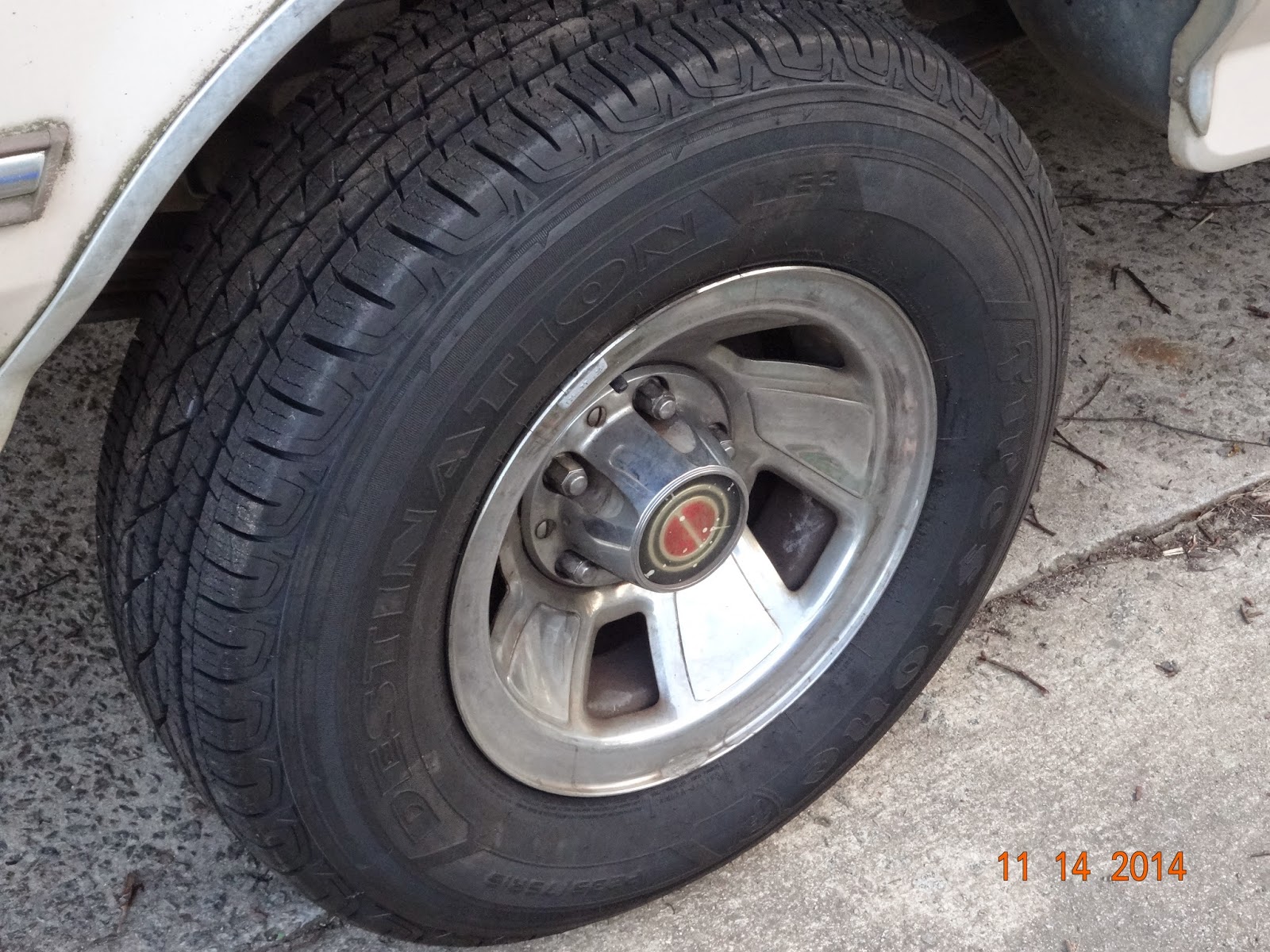 Thats right... ONE Tire! OUCH! The tire it replaced had a bulge that was about to burst and the belts were splitting so it had to be purchased. We need to buy another one to match and have them switch the old tire on the other side of the truck for  the recalled long ago Firestone spare under the truck when we can afford it. But Greg's tuition is due by the 12th of December and that will have to come first. I tell you it's always something! I hope he finds work SOON.

Yesterday I took a couple pictures of two of my "fellas". Tesla missed Scott so much yesterday that he got jealous of the laptop and climb into Scott's lap and got between the two and remained there quite happily for some time. I'm not so sure it was too comfortable for Scott though but Tesla looks quite satisfied... don't you think? 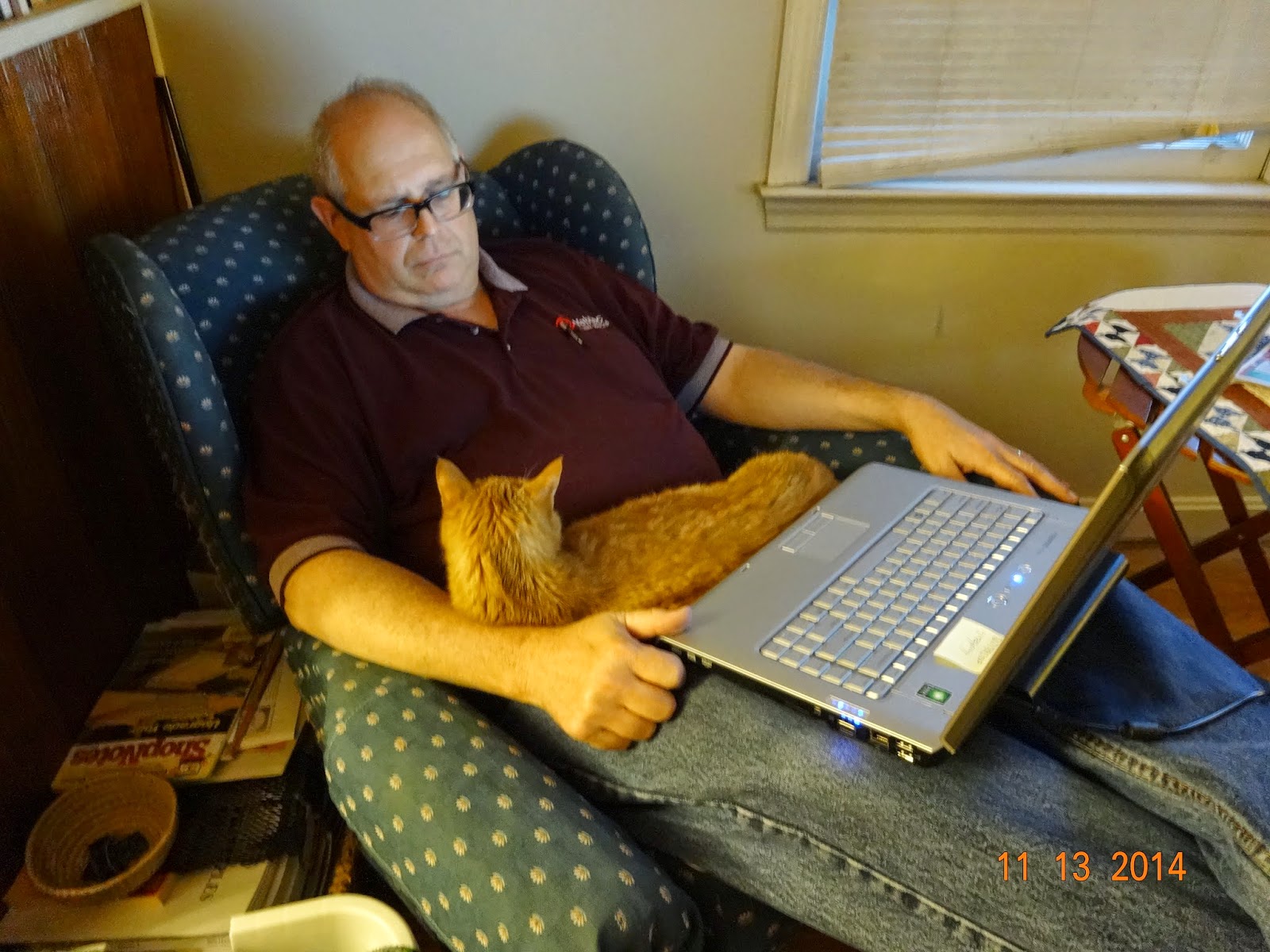 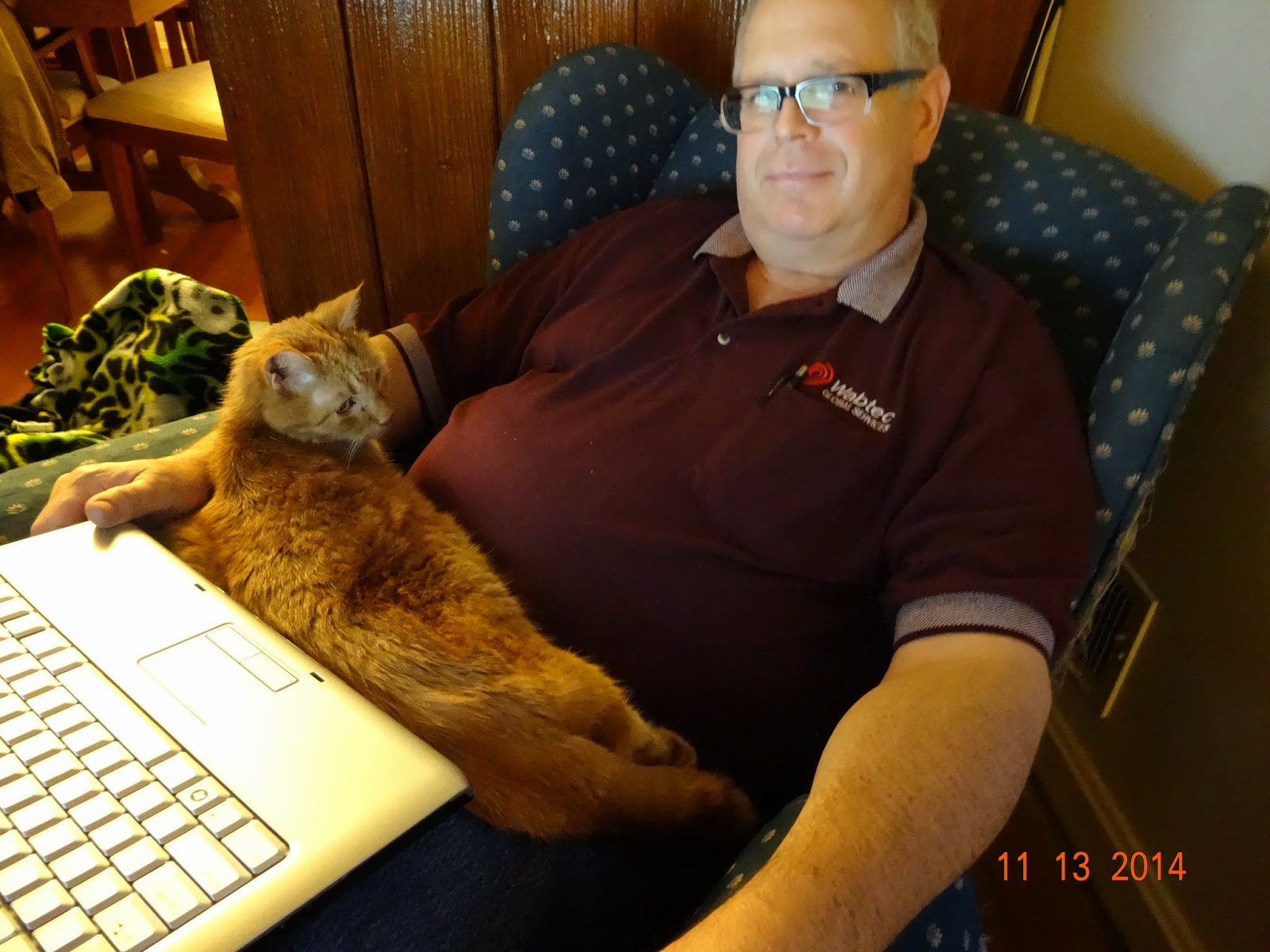 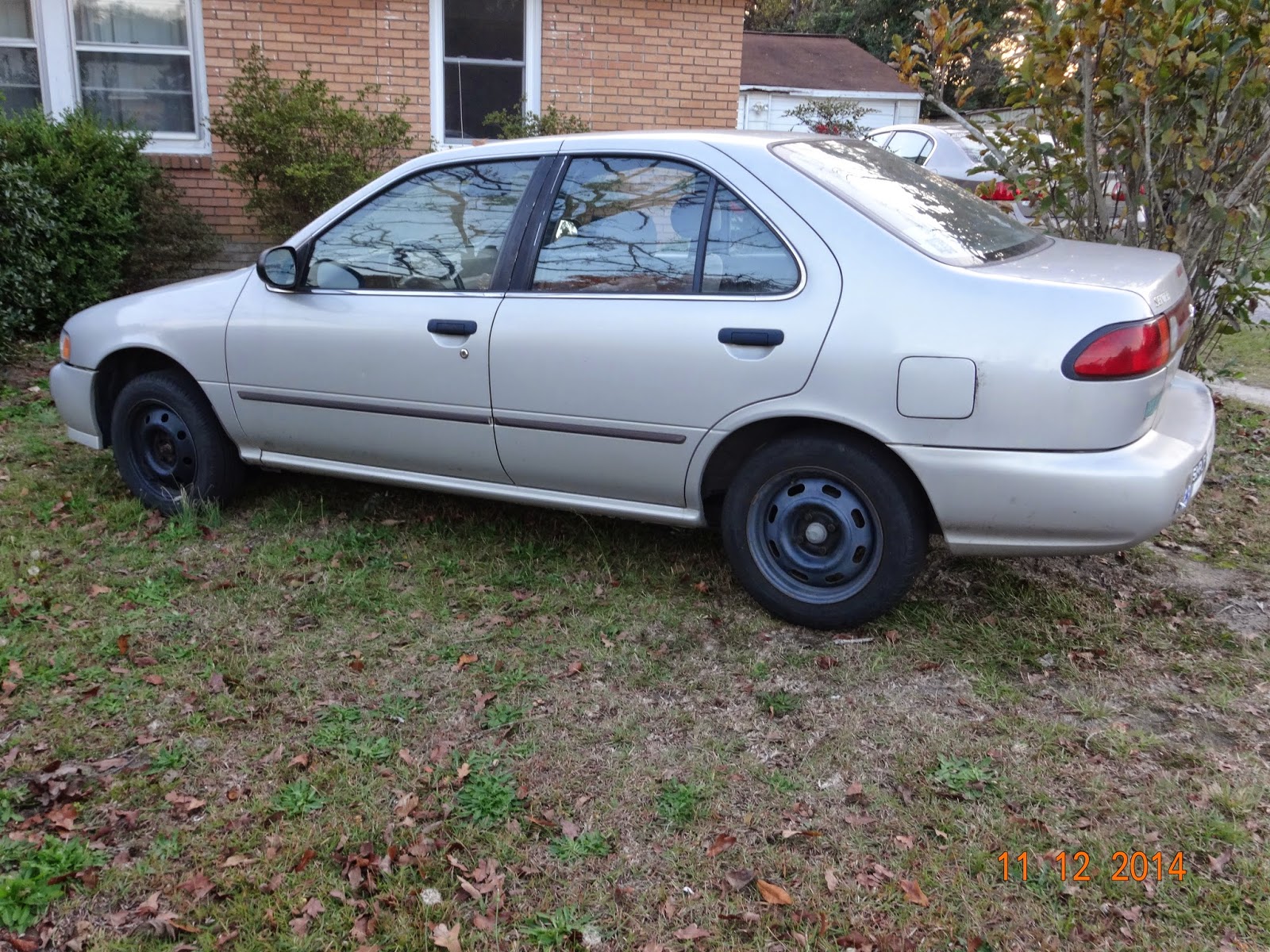 Wednesday morning "The Roach Mobile" would not start so Scott had to drive the truck with the bad tire to get to work. He thinks he needs a couple sensors on it as it seems to not know how it's firing order goes and will not start. When it rains it POURS in repairs and bills. Scott had taken Monday and Tuesday off to get a few days of vacation used up and to catch up on some projects around here. He painted the ceiling in the laundry room it is looking so nice and BRIGHT! 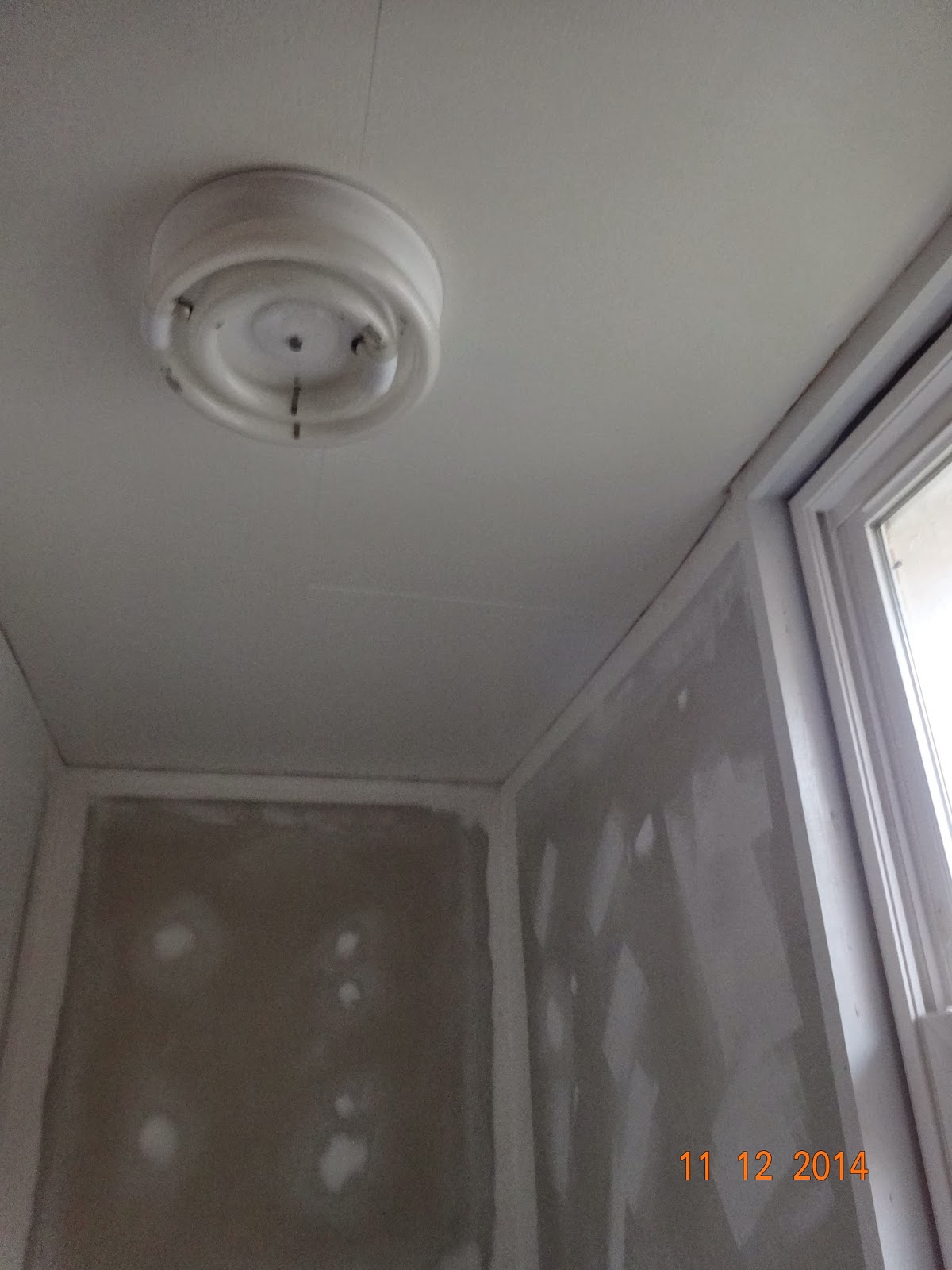 And he did this to my dishwasher... 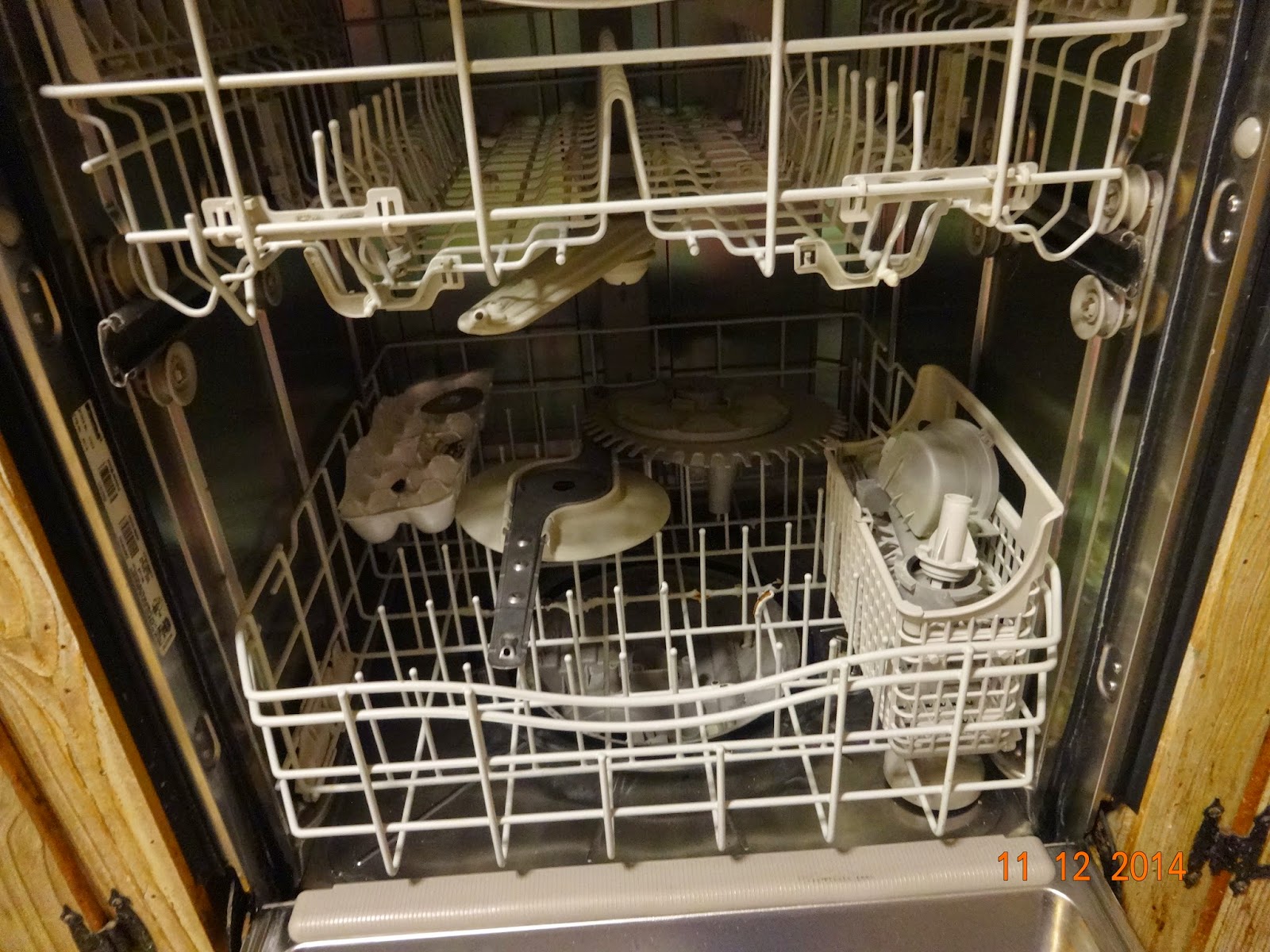 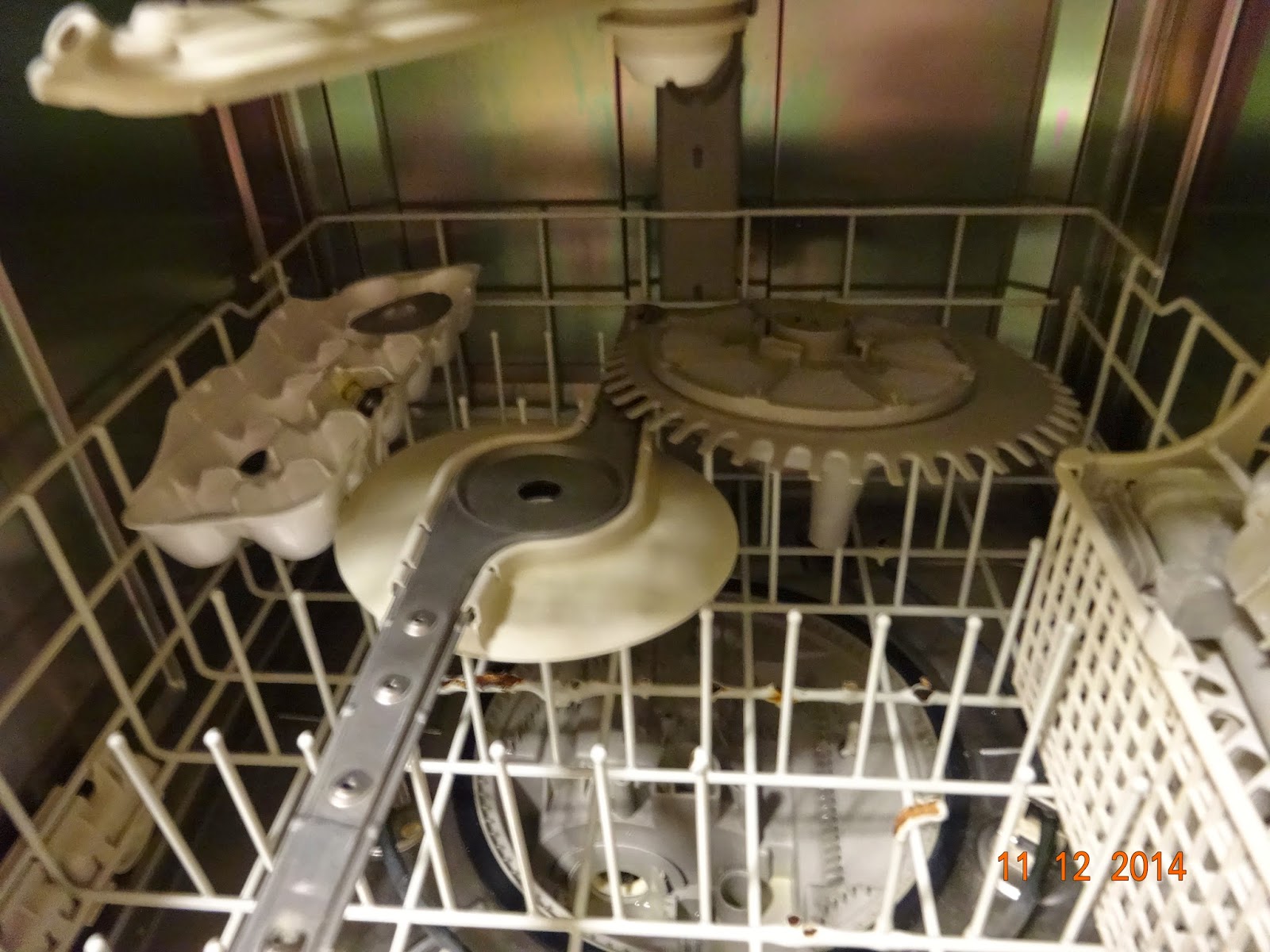 Yep... it needs parts too! Remember ... it rains when it pours!
So I am back to doing dished like this... 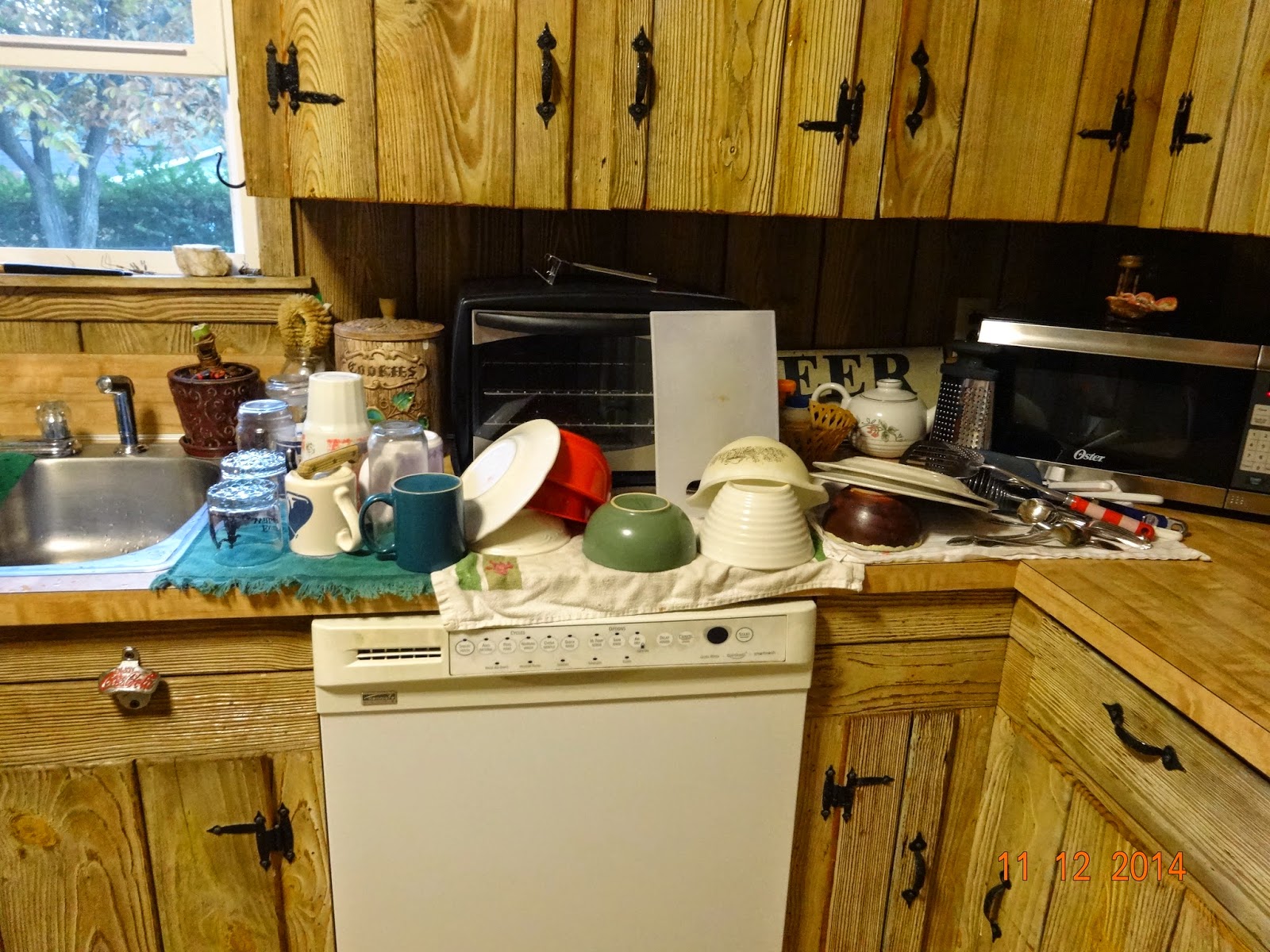 It reminds me of my childhood. My Grandma was a firm believer that dish washers never got the dishes clean and wouldn't buy one.

I've started preparing two canvas back grounds for the little 4x4 canvases that fellow Crafter's sent to me from around the World. I still have quite aways to go but this is the start so far. 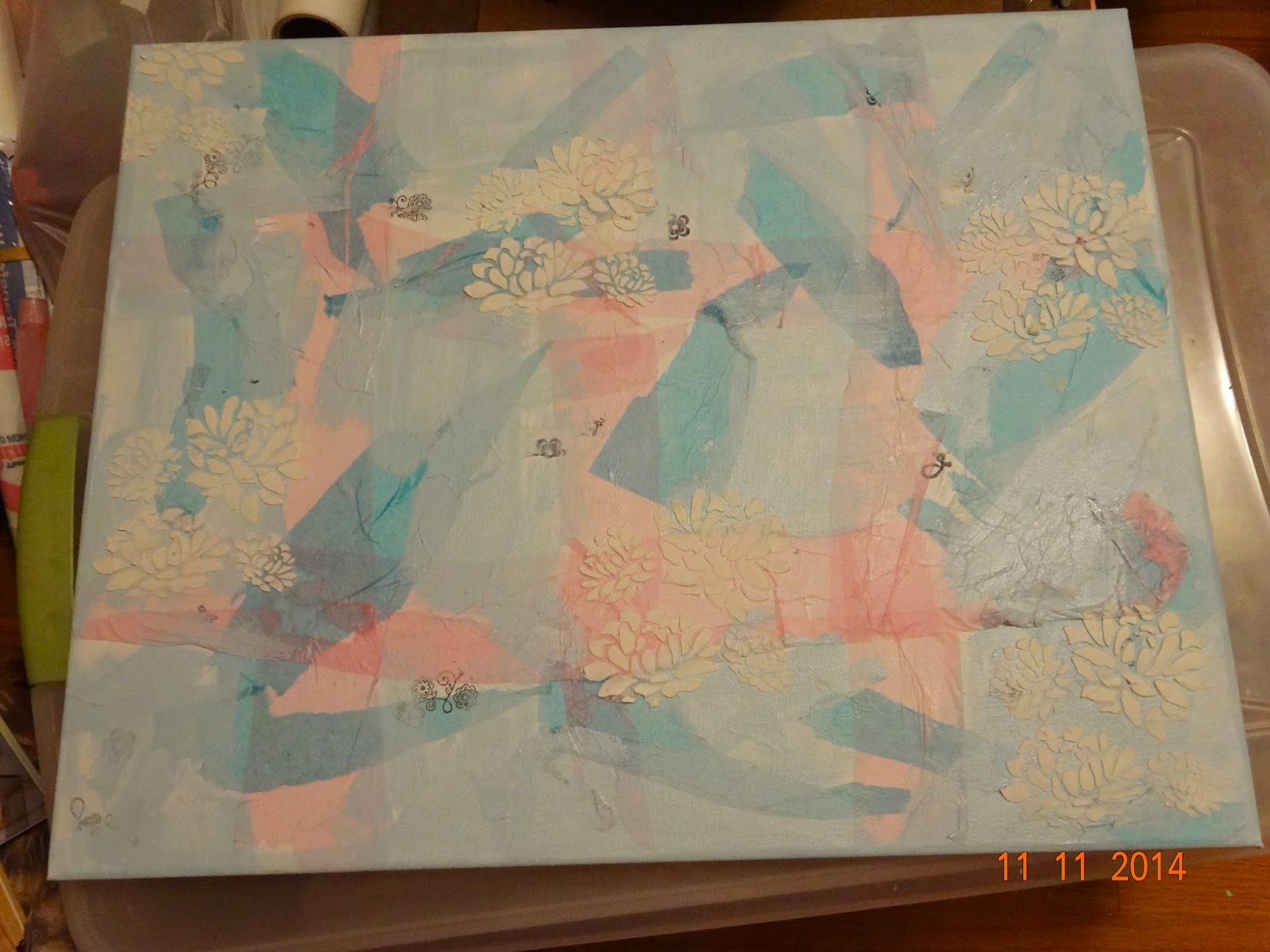 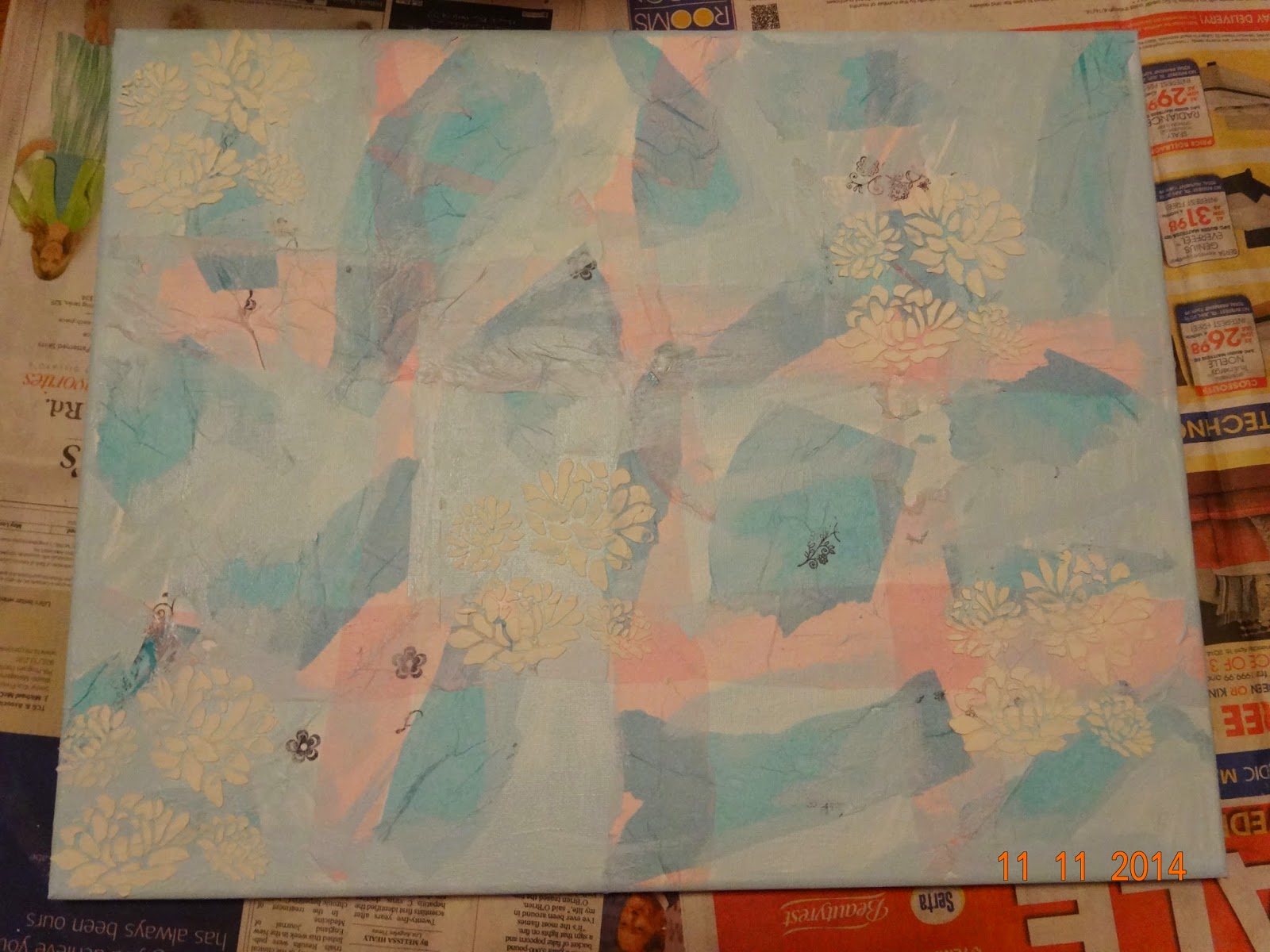 These are the little canvases in their layout... I will put them back just like this once the back grounds are completed. When they are all finished I will post some more pictures on here for you all to see. 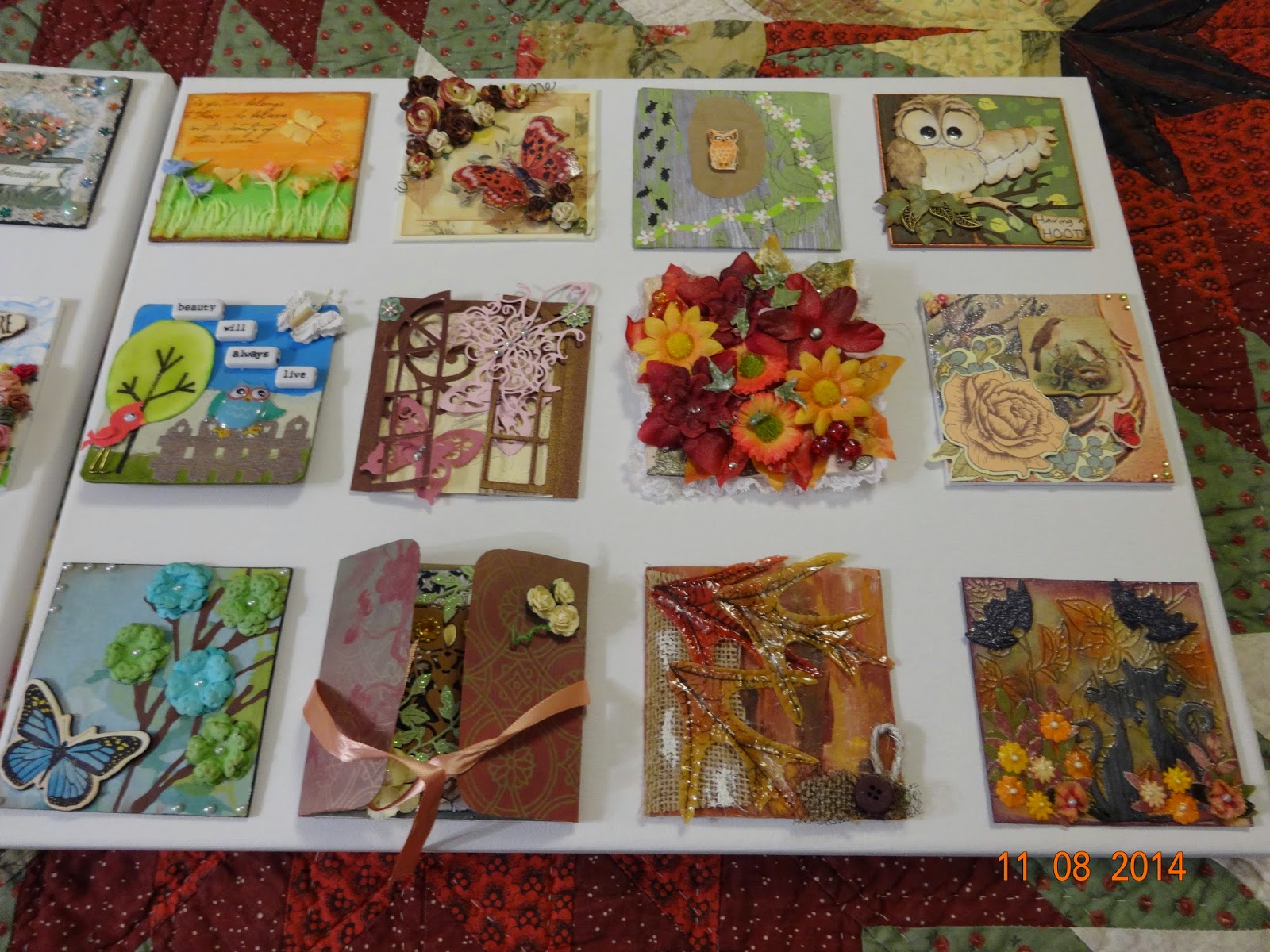 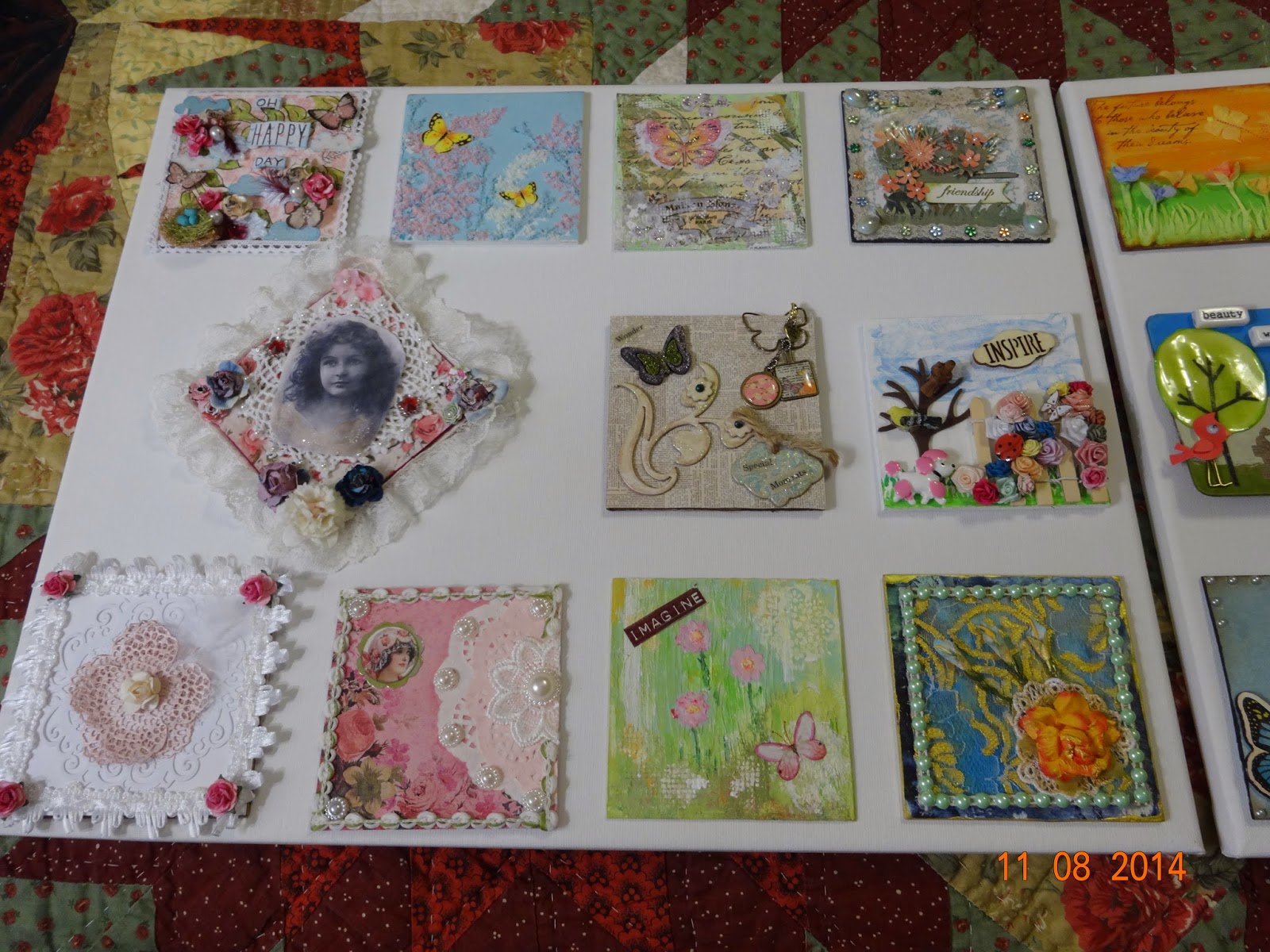 I guess that about gets everyone caught up and I hope everyone is staying warm and doing well.

The "Season" has arrived...

I don't know how things are anywhere else in the World but people here are shopping early and shopping hard. The store is packed as soon as we open... or so it seems. It's such a mad house! I'm working more hours and longer days... GREAT for the pay check not so much for my 50 year old body. Definitely aching more at the end of each day.

Our son, Greg was let go from his job due to budget cuts and has not found another job yet so I will be helping him with his bills. Hoping he finds another job and SOON. It's not an easy job market to get back into these days.

I guess the best way to get things caught back up is through photos as I always have my camera with me these days... Well it seems the last pictures are all of Greg and his jack-o-lantern on Halloween. So I really have been just eating, sleeping and going to work. Greg brought this HUGE Pumpkin home on his Moped... he was stopped several times by people in the neighborhood wanting to take his picture as it was quite humorous... of course I don't have any of THOSE photos myself. We had a nice Halloween with about 25 trick-or-treaters; I miss the days when we would have so many kids we'd run out of candy but I guess those days are gone for good. 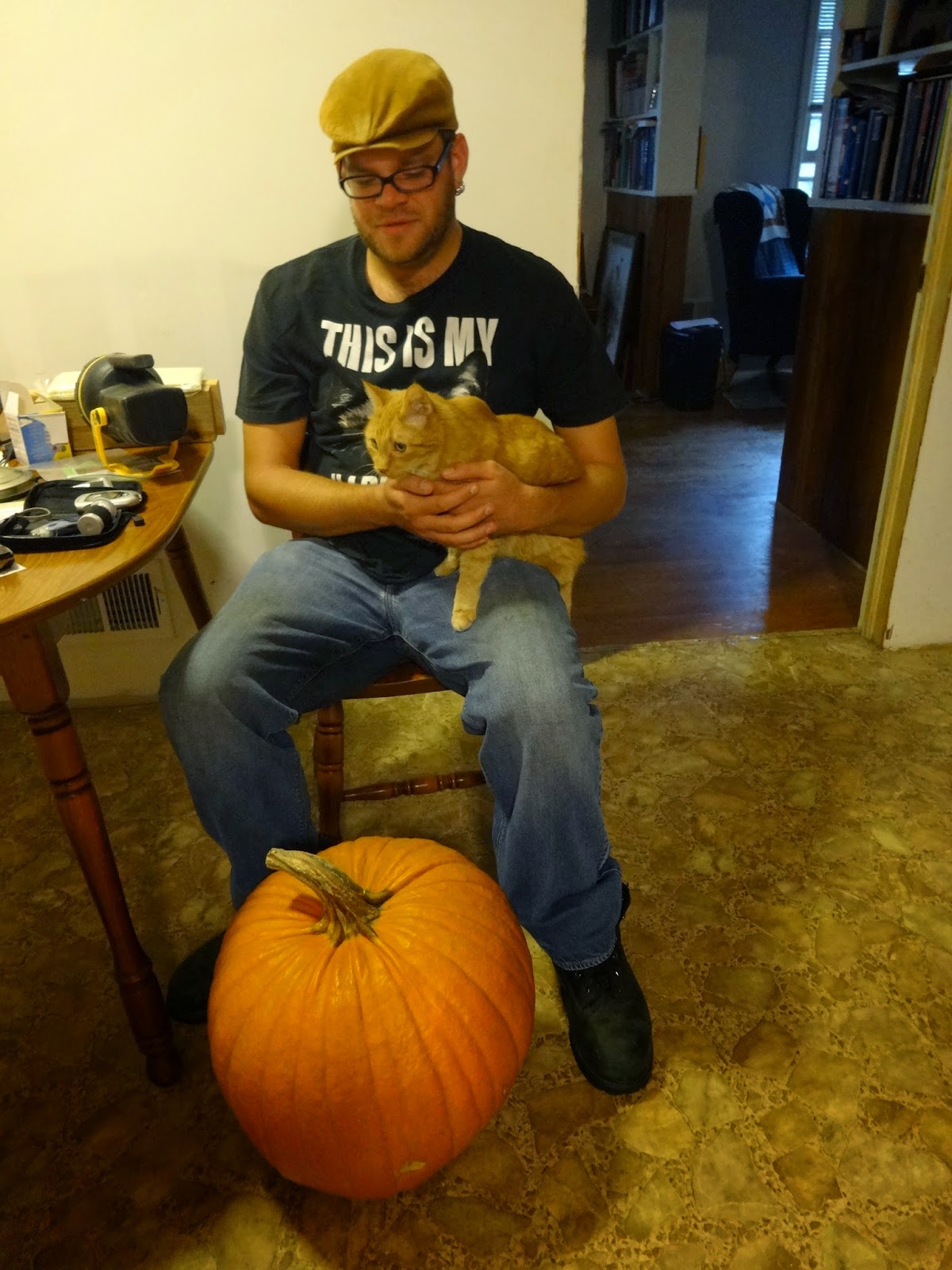 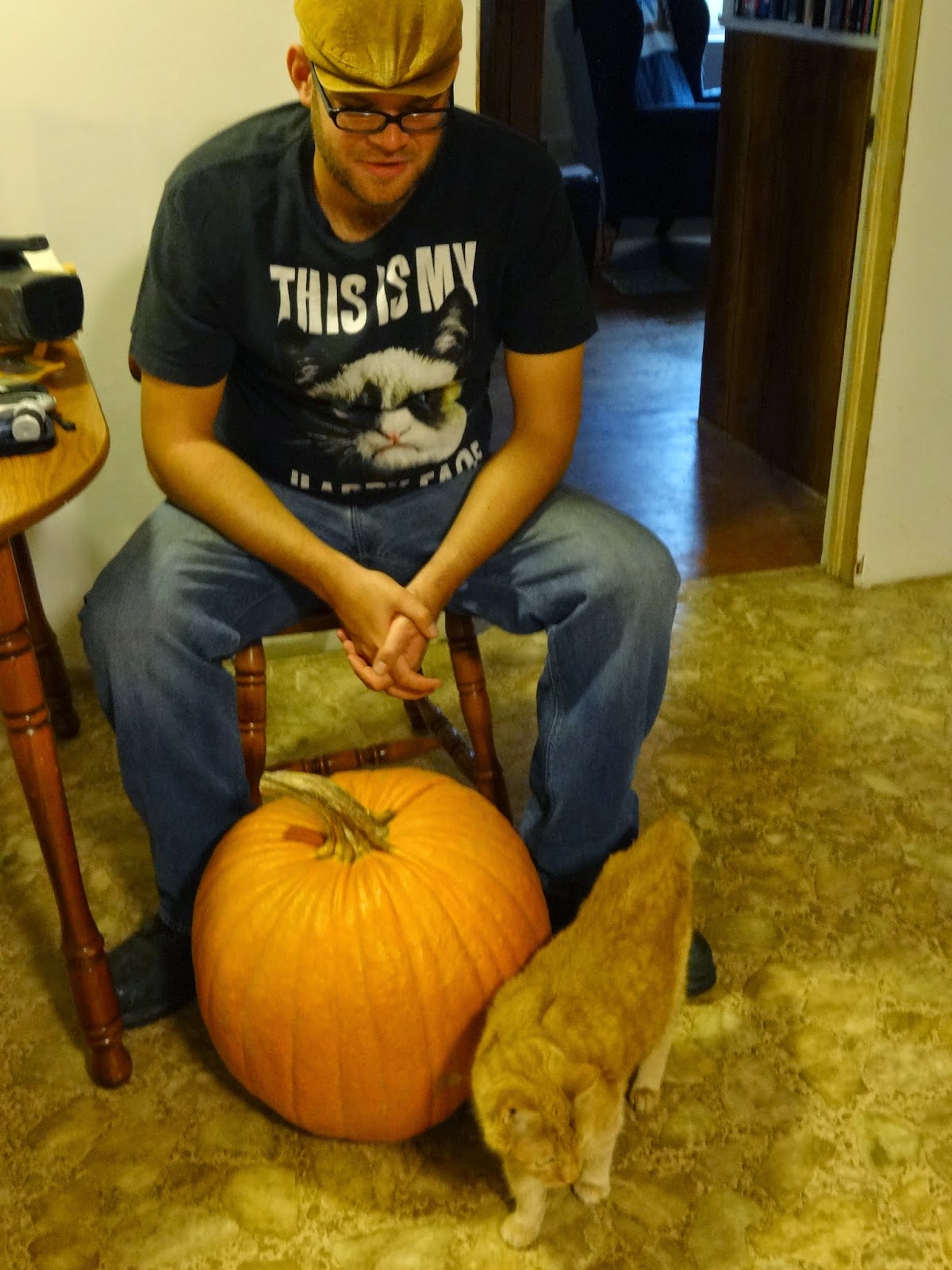 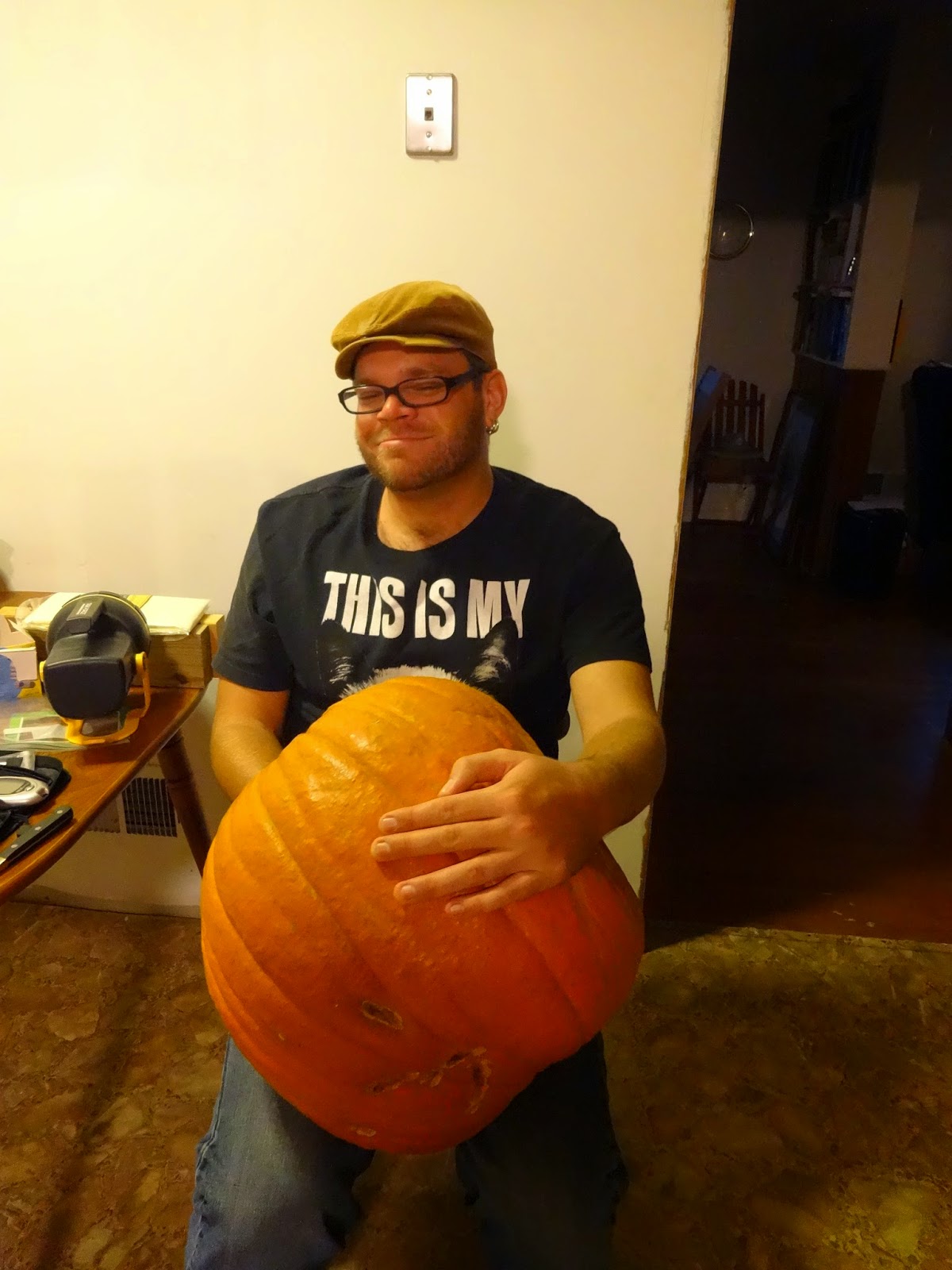 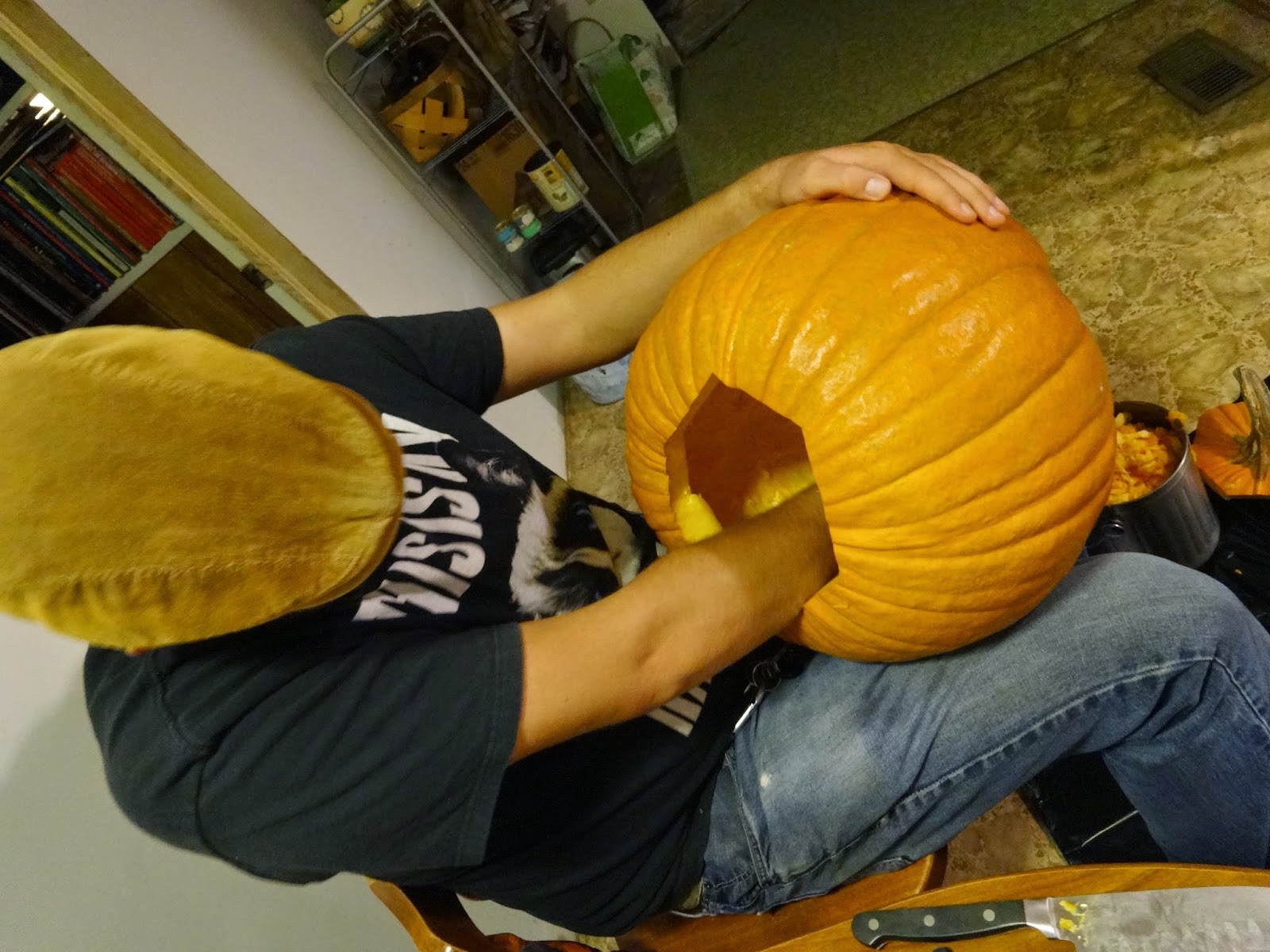 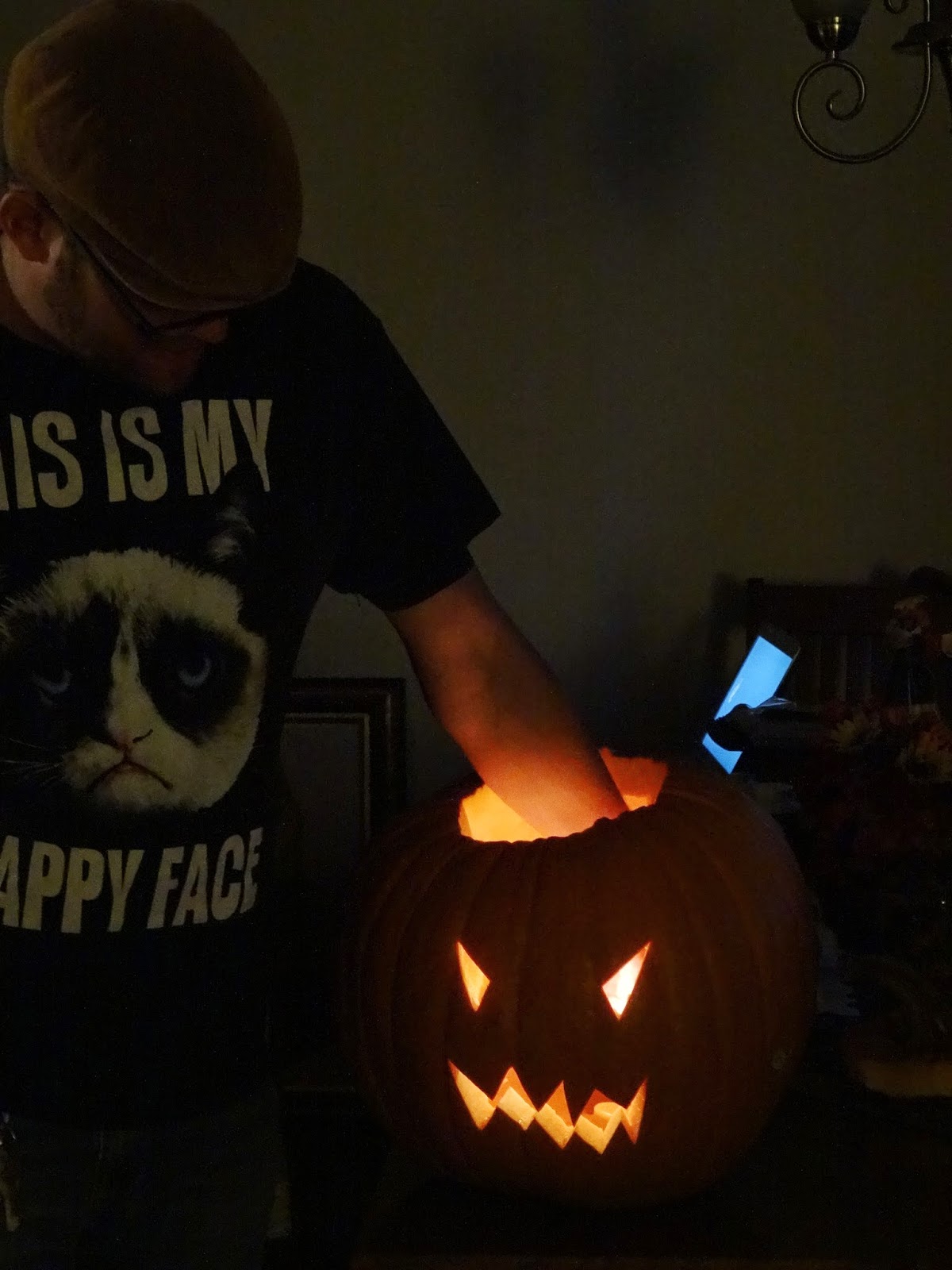 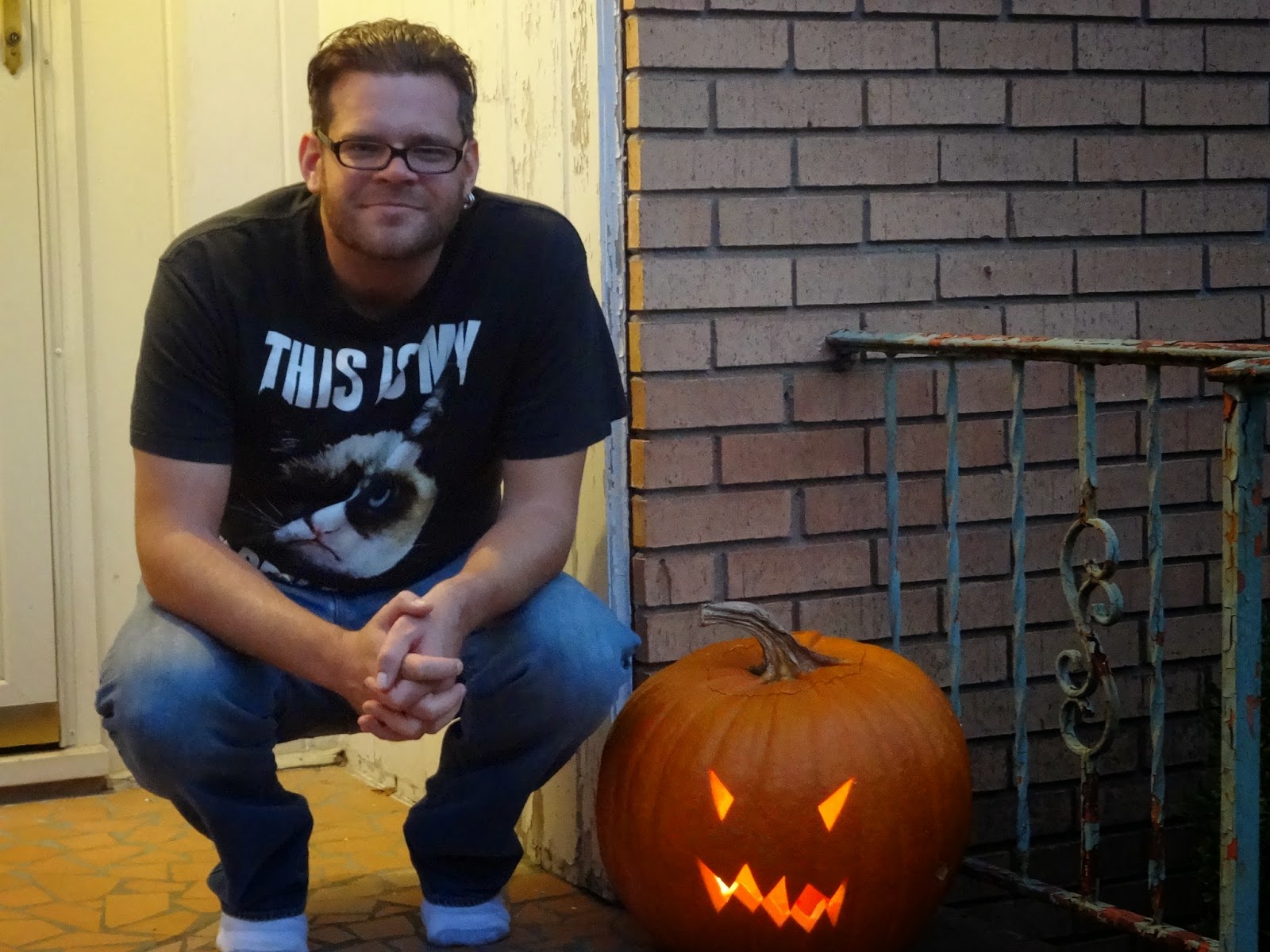 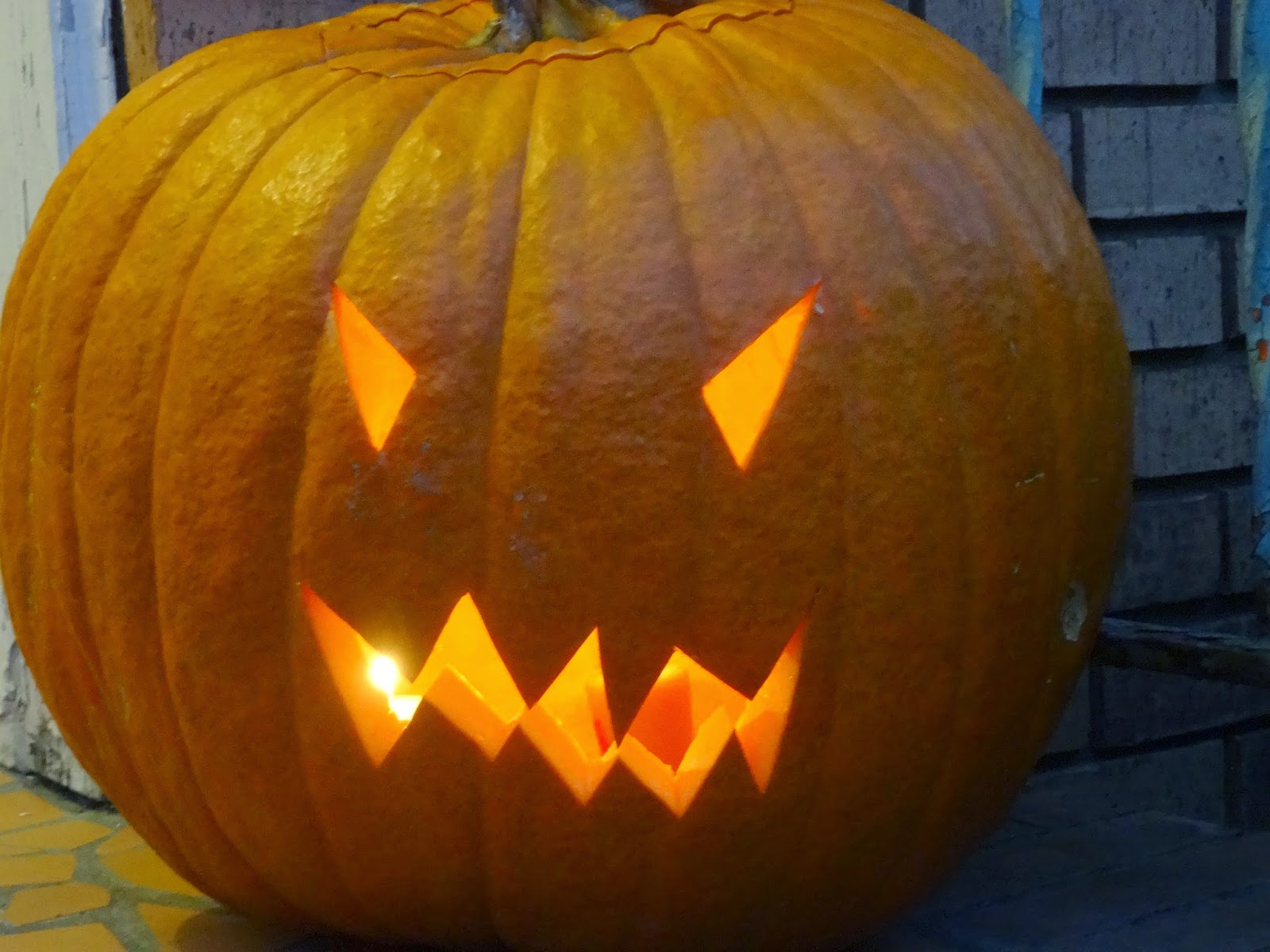 Two cats, some soup and a dog

Tippy Howie Vegetable beef soup and cornbread My very first toy... a dog  On November 8th I decided to do surgery on the little dog that cam... 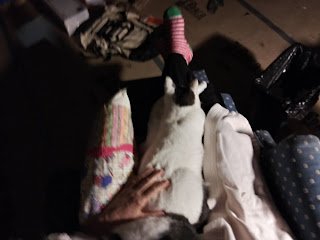