2019 Just around the corner

Can you believe it? 2019 is just a little over a month away. Time truly does speed up as you get older. We are still staying in Adele's little house here in Greenville as the repairs and updates to our house is taking considerably longer than we ever thought it would. We have our 10 acres for sale in  the hopes of getting it sold so we can hire some things out like repairing some plumbing issues and getting a new roof put on the house. I am nearly to the point of just wanting to move back there once Scott retires as it has everything we need and want in a house and we own it already. I am not finding anything close to it up here in  the same price range. My only concern is the 3 cats we adopted since living up here... not sure how they would like living down  there and I would want to install some kind of fencing to keep them from wandering the neighborhood as there are so many stray cats down there. But alas none of it is up to me so I will continue just sitting in the passenger seat. 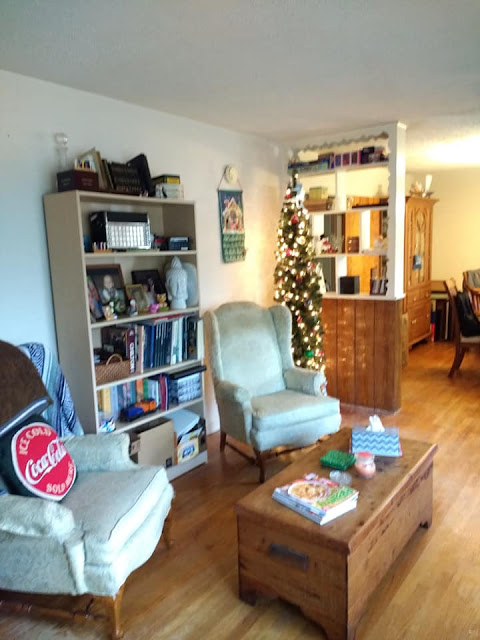 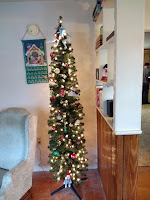 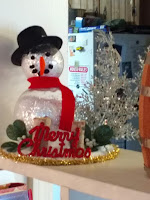 I set up a Christmas tree down at the house and a few other decorations to make the house feel more "Christmassy". I rearranged the furniture and cleared out all the remodeling materials from the front room to give Greg a more settled environment for the Holiday Season so he would not feel like he was living so much in a remodeling environment... at least in the front two rooms. I wish we were all going to be together for Christmas in the house but Scott and I have committed to going down to Adele's in Atlanta for Christmas day. We will have Christmas with Greg the weekend after Christmas. I hate how the families have all grown apart so much but I understand why... everyone's' path takes them in a different direction. 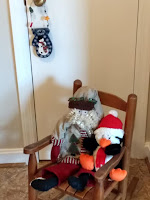 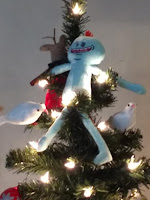 Greg wanted Mr Meeseeks as his tree topper this year since all the toppers we have are to heavy for the top of this skinny tree.  If only he could fix the divisions in both families.

I bought some yarn at the thrift store day before yesterday and made Scott a new hat as he has misplaced the two I had made for him before. It was a great deal... I have enough yarn to make 8 hats and then some and it cost me less the $4. I have started on another hat so there will be a back up in case he looses the one I just made. His head gets so cold with no hair atop it without a nice hat.

I have given ZERO thought to any gift giving this year except for Scott and Greg. It's so hard when a family has grown as large as ours and so far apart that the love is missing. As we have no grand- children and the nieces and nephews are getting a little older and think we're weird we don't really have any little ones in our lives to create excitement like there once was. But we will do the best we can to spend time with the family that still wants us around.

OK... enough of Becky Downer. I truly wish you all a wonderful Christmas Season!

Here it is time to "fall back" once again and the "Holiday Season" has started in the stores. I am thankful I am experiencing the retail hell from this side of the doorway and not in a store. It makes the Holidays so much more enjoyable for me. I have time to create handmade gifts and my goal is to make gifts using only from my stash and/or thrifting. I am almost certain I can come up with some really nice gifts by Christmas. Our gift giving will be focused on the children under 18, our parents and our son, Greg. The families have just gotten too large to gift everyone and everyone feels the same way.

Scott and I are continuing to make the trip down here to the house to work on it and get it ready to sell. We are so hoping this Spring we will be able to get it on the market so we can move on with our life in the Greenville area. So many projects to do and with only getting down here twice a month things are going slowly. We can only do what we can do and hope things come together by March.