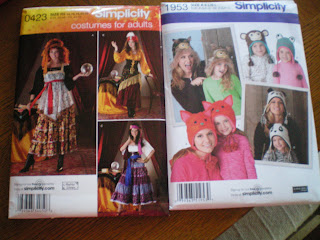 These are my 99 cent (each) purchases from Jo-Ann's on Friday. The FQ's are for a quilt swap I'm doing later in the year; the color is actually a bit darker than they appear in the picture below.

The patterns were just super fun and I'm thinking each of the littlest nieces and nephews may get a hat for Christmas. 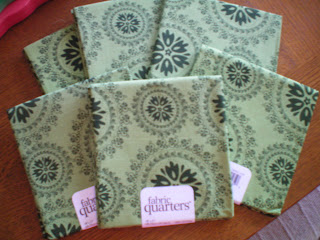 Yesterday I gave both dogs a bath and then spent an hour trying to get mats out of Bernadette's coat; I finally broke down and cut them out. She may look a little scrappy at the moment but she looks a hundred times better than the mats. Amelia got so jealous of Bernadette as I was brushing her for so long and talking to her about how sweet she was to let me cut all that mess out. Amelia came up to me on her belly and I asked her if she wanted to be brushed too even though she has short hair that is easily managed with just a good rub from a towel. I started brushing her and she looked so happy... goofy dogs! During all this Scott had to get Tesla (cat) locked up in our bedroom as he was going into "ANGRY" cat mode and Scott was afraid he would attack me again because I was showing affection toward the dogs. Tesla really is a little Tyrant! To top all the bathing off we took the dogs for a walk around the neighborhood... THE HORROR! The poor cat was beside himself and this morning he has gone into super suck-up mode and is on Scotts' desk demanding attention by being super cute...

Scott had a job Interview on Friday that went REALLY well so here's hoping that it pans out and he has a job again before the end of this month. He said that he just has to talk with a guy from "Corporate" to get his final approval but we've heard that before so we will wait and see.

My Boss has put in for a raise for me that I am truly hoping it goes through as we could really use the money. Especially with the holidays just around the corner.

Well that's been the weekend so far; today I am planning to sew and perhaps we will go for a walk along the River-walk. I hope everyone is having a wonderful weekend... they certainly don't last long enough.
Posted by Becky at Sunday, October 09, 2011