After the week of long hours Scott had last week we decided to walk along the river while down at our house on Saturday. The break from repairs and upkeep on the house and away from the thoughts of work of any kind was just what the Doctor ordered. We SO MISS the Cayce Riverwalk as we knew we would. So getting to revisit it was such a joy.

The River was up a bit so the fishing must have been pretty good. We saw several people fishing along the bank and one group of fellas just below the locke's damn in a boat. The section that had been closed since the horrible flood of October 2015 has finally been re-opened as repairs have been completed. We could see where so many trees were lost from flood waters pulling them down as well as killing them and  they had to be cut down for safety. It really opened things up along that stretch of the riverwalk. 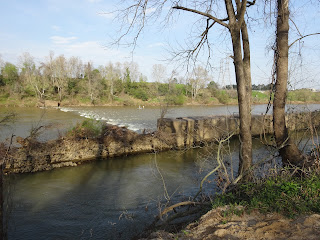 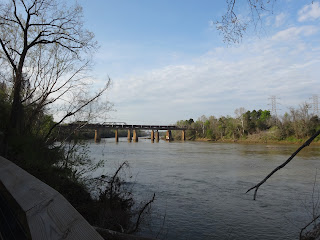 On our return to the cottage the cats were so happy to see us and cat piles in front of space heaters were the mission. Callie and Tippy were in their happy place to be sure. 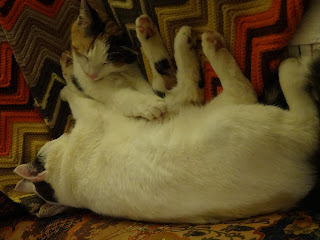 It is feeling like Spring is REALLY going to make an appearance in the next couple weeks and I will be so glad. I'm ready to be warm again.
Posted by Becky at Tuesday, March 27, 2018